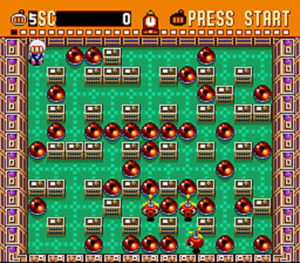 You start with only one pump and minimum blast radius. The first thing to do is search for a power-up quickly to destroy enemies. If an enemy is trapped between the blocks, not destroy these blocks. After finding a power-up, start destroying enemies. Enemies trapped between the blocks are easier to defeat then use that to your advantage. After finding the exit door make sure you got all the power-ups. 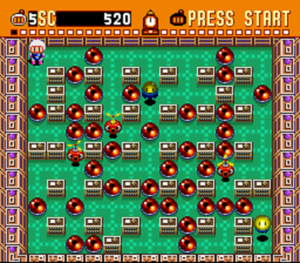 Give welcome to Denkyun, the new enemy and increase your speed with the accelerator! Denkyun takes 2 hits to be destroyed, so first destroy the Denkyun and let Puropen to be destroyed later. You will find the accelerator, which increases your speed. There is also one extra bomb here, to increase the ability to drop more bombs at a time. You can also find an Ice Cream Cone hiding here if you explode a bomb at the exit door. 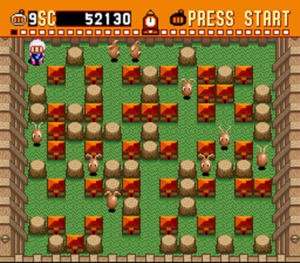 A new enemy appears! Star Nuts may seem dangerous, but it only takes 1 hit to be destroyed, so be prepared to destroy a lot of them. Increase capacity bombs a time with one extra bomb and capacity greater blast radius with a valuable Explosion Expander. Now you have the ability to kick bombs! With the kick, push on a bomb to send it to a desired location. You can stop it at any time by pressing the 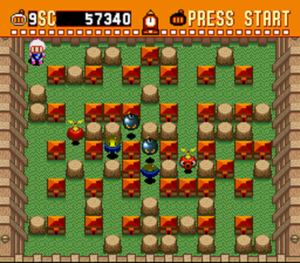 More an enemy! Bakuda can cause serious problems, as it explodes like a bomb. It is easy to defeat, it only takes one hit, but he can destroy power-ups, blocks, and the exit door. Besides increasing the speed with another accelerator, you can stay invincible for a short time with the Indestructible Armor. Do not forget that Bakuda can destroy some enemies. 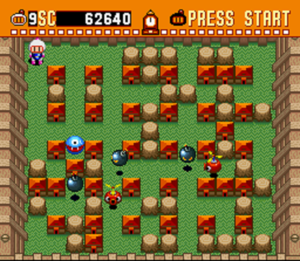 Unfortunately, the new enemy is very difficult to defeat. Pakupa takes 3 hits to be defeated, and can devour bombs. The best strategy to destroy it is to plant bombs as far away from him. If you lost your ability to kick bombs, you can kick them again with another kick. A time can be caught here, which resets the remaining time you have to complete the area. If you can pick up the remote control, it will be much easier to defeat enemies as you can detonate the bomb when you want. 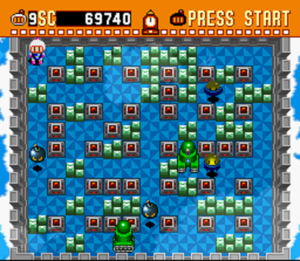 Senshiyan may seem very difficult, but it is actually easier than Pakupa. It takes 3 hits to be destroyed, and also pauses to send a torrent of fire that only damages the player in touch. There is an extra bomb that can be useful. You can also find the block passer. This item allows you to go through soft blocks, which makes the game much easier. 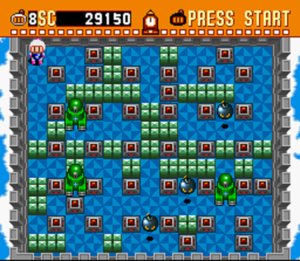 This area is very simple. Destroy the enemies normally, taking care of the explosions of Bakuda and torrents of flame of Senshiyan. Another Extra Bomb can be found here. If you have not died and took all Accelerator, will be super fast with another accelerator. Here there is also a Bomberman. This item increases the number of lives of Bombermen. Collect all the power ups, because the next area is a battle against the boss. 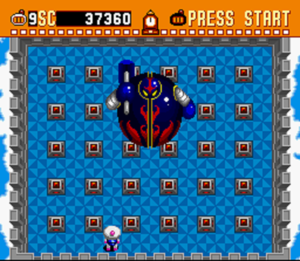 Bigaron moves between blocks at a slow speed of 2, pursuing the player. It will harm players on collision. Despite its large appearance, its collision area is a single block space at the bottom of its body. Every now and then, Bigaron will suddenly stop and swing its hammer into the ground, sending several chunks of debris flying a short distance outward from the impact. The debris will harm players on collision.

Plant bombs near it to destroy it. Take care when he slams his hammer on the ground.