Robot Amusement Park is the second world in Super Bomberman. The first five areas of the stage take place in Playland (プレイランド Pureirando), while the last three areas take place in the Mystery Circus (ミステリーサーカス Misuterīsākasu). 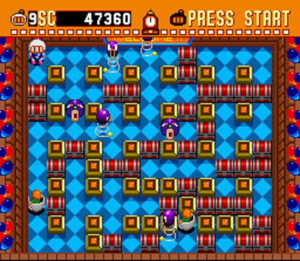 There are 3 new enemies in this area. None of them is more difficult than the last enemies you find. Each takes 1 hit to be destroyed. The biggest threat here is Cuppen as it can go through soft blocks. Some power-ups can be found here. One is an extra bomb, which will increase the ability to drop bombs at a time. An indestructible armor can also be found to help you. A time can be found, if you need to. 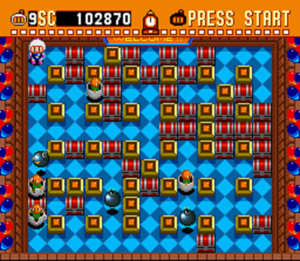 This area is very simple. Destroy the enemies to a large number of points and grab the power-ups. The Bakuda will probably help you to destroy blocks and other enemies. A Boxing Glove can be found here. This power-up allows you to give punch the bombs, which is very useful. There is also a Bomb Passer that allows you to cross the bombs, but you will not be able to kick bombs. 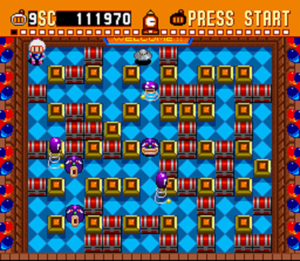 There is a new enemy here that can cause some problems. Metal U takes 2 hits to be destroyed. He chases the player constantly and does not pass through enemies. Here there is an extra bomb and explosion expander to destroy the enemys. There is also a Remote Control in case you missed it. 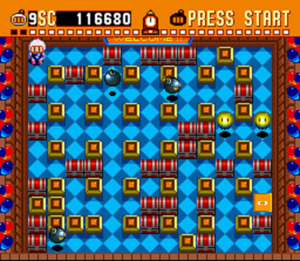