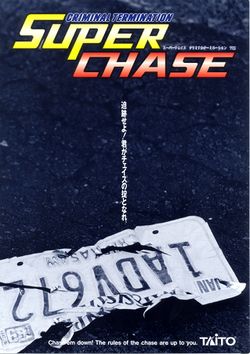 Super Chase - Criminal Termination is a first-person racing arcade game that was first released by Taito Corporation in 1992; it runs on the company's Super Z-System hardware, and is the third title in the Chase H.Q. series (it's also based in the future, as its crimes take place over a four-month period from July to November 1993, which was the same year it got ported to the Super Famicom under the name Super Chase H.Q. - Criminal Chaser). The player must use a steering wheel, two pedals and a gear shifter that has a "Turbo Activator" button, in order to help undercover policemen Tony Gibson and Raymond Broady (also known as "Mr. Driver") catch up with various criminals in their red Nissan 300ZX T-Top Turbo from S.C.I. (but for the second stage, they switch to a four-wheel-drive jeep, and for the fourth one, they switch to an eighteen-wheeled articulated truck), then ram their cars until they are too damaged to keep going (their damage level is, once again, indicated by a meter that appears on the left side of the screen, but the amount of times the player has to ram them is now indicated by an arrow with the text of "REMAINING: X", with X being the amount of rams remaining, above them).