There are three modes of play in Super Dodge Ball. The first is World Cup Play. This is only for single players. A player takes control of the USA team (or Nekketsu high school on the Famicom), and must battle other teams from around the world in order to claim the championship. If the player succeeds in defeating a team, he or she advances to the next round. If the player loses, they are given the opportunity to continue and redo the losing battle.

The second mode is Versus Play. This mode is for two players. Each player chooses from among the nine different teams and faces off against each other in a battle. Press

while choosing a team to see each players' statistics.

The third and final mode is Bean Ball. This mode is for one or two players (up to four on the Famicom). In this mode, each player takes control of one particular player on Team USA (or Nekketsu high school on the Famicom) in a free-for-all battle, where the winner is the last player left standing.

For World Cup Play and Bean Ball modes, the player must choose a difficulty level which dictates the computer controlled players' level of ability: 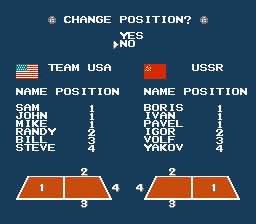 Before each round of play in World Cup Play or Versus Play, players are given the opportunity to move players around the court. The position change screen is shown to the right. This screen gives you the opportunity to ensure that players with particular Power Shots are available for use in the inner-court. Three players must be placed around specific edges of the outer-court. If you are in World Cup Play and choose to rearrange your characters, the computer will also rearrange the players, but there's no guarantee that the new arrangement will be any different from the previous arrangement. In this way, you can try to influence which computer-controlled opponents will occupy the inner-court. 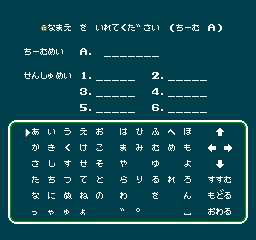 This feature can only be used in Famicom version. Press

during mode selection will open a special screen where players can name their own team and members. The names will then be applied to whatever team going to be used. Player one and two have independent setups.

Every player in the game has seven stats which determine his skills and abilities. These stats are:

There are six different types of players. One of each type is represented in every team.

Nice Shots do twice as much damage as a regular shot. They are performed by executing a regular throw in just the right fashion, and can only be performed by player with very high Throw Technique values, particular Type F players. When performed correctly, the ball does not change in appearance, but the ball travels a little faster, and a whooshing sound can be heard as the ball flies through the air.

. If performed correctly, the ball will flash and its movement will take on different properties, depending on what type of Power Shot the player is capable of performing. Each team captain has their own unique Power Shot.

Note that in the Famicom version, the execution of Power Shots is much more precise, as the ball must be thrown on the seventh step of a dash.

, and then pressing and holding

The USA team is the team that you control throughout the World Cup mode of play, as well as anyone participating in the Bean Ball mode of play. They are the all-around average team, not necessarily specializing in any particular aspect of play. Their captain Sam (Kunio in the Famicom version) is capable of the devastating Blaster Power Shot which can be used (and somewhat abused) to make short work of any competition. In the famicom version, the palette of Japan team is used instead.

In the North American version, this is Team USA's rivals. In the Famicom version, this is the competing high school, Hanazono H.S., and their stage is actually set in Japan. Like the USA Team, they don't excel in any one area. However, each player is amazing at something different. For this reason, and because of their low stamina, it's a little more important to pay attention to where each player is placed in or around the court, and how you plan to utilize them. Notice that their type B player Paul has a second Power Shot, able to be performed even in the outer court.

Team England's strength is their relatively high Throw Technique. If you can keep the ball in their hands, you will be very likely to pull off the Nice Shots and Power Shots needed to knock the competition out. However, their weak point is their inability to take a lot of damage. Even their B type player Peter isn't so good at sustaining a hit. When going up against England, you should find it fairly easy to knock them out quickly.

While Team England is pretty poor when it comes to taking damage, Team India is the best in the world. So much so, that their type B player Swami will mostly take 1 damage from normal shots, and 2 from power shots. On top of that, they have great Ball Breaking skills, and they're rather fast. Unfortunately for Team India, when it comes to hurting the competition, that's where they fall apart. When going up against a computer controller India, you might want to try changing positions a couple of times until Swami is no longer positioned in the inner-court. During that, you may also witness their captain Rajiv being placed in the outer-court.

The battle against Team Iceland takes place on a large sheet of ice. The ice exaggerates the effects of any momentum that players carry with them as they dash along the ice. Being a fairly healthy country, the members of team Iceland have a high amount of energy, so you'll need to hit them a lot more in order to knock them out. However, they don't really excel in any other area, and they're quite slow.

Team China is not the most difficult team, but they're certainly no pushovers. Their Catch Technique is the best in the world, so be prepared to have a lot of your throws turned against you. They're also fairly fast and have good Throw Technique scores. Their undoing may be their low Damage Capacity scores, although they're still better than Team England when it comes to taking damage.

Team Kenya (Team Africa in famicom version, as the team before championship) possesses the greatest amount of speed around the world. This is particularly helpful to them on their own home court, where the soft ground makes it difficult to build momentum for Power Shots. Outside of Agility, Team Kenya is fairly strong in other areas, but poor in Ball Breaking ability. Players battling in Kenya need to remember that it's the number of steps that count, not the distance traveled, when attempting to make a Power Shot. Like Team India, their captain Yemi may be changed into outer-court.

Team Japan is the semi-finals challenge before the Championship round. On the Famicom, the stats below belong to team USSR, who players must face-off with on their sixth match. Either way, this team possesses considerably strong Throw Power. It won't take too many hits from this team to whittle their opponents health down to nothing. The only thing they lack is Agility, but when you throw the ball like they do, you don't need to be fast. Also notice that, they tend to start attack from their leader, and if you manage to knock him out first, they will become a pile of sand.

The championship battle takes place in the former Soviet Union for the American team in the NES version. However, in the Famicom version, the members of Nekketsu high school go to the United States for the championship, and the stats below belong to Team USA instead. The last team had good Throw Power, but this team even out-throws them. And none of their other stats are particularly low. About the only weakness they possess is the fact that none of their players can use the devastating Blaster Power Shot, or the troublesome Lightning Aerial Power Shot.

If you manage to defeat Team USSR in World Cup Play without losing a single member of your inner-court, you will have the opportunity to play in a mirror-image battle against a shadow version of your own team. The sky will crack with lightning as you duke it out once and for all against yourself. Expect the shadow team to be a little more lethal in the hands of the computer, but stick to the strategies that helped you reach this battle, and you'll do fine.