These players comprise the majority of your team. They are average in every way: speed, defense, and offense. They can move around the court fairly swiftly, and are capable of throwing the ball with moderate power, but they can't perform any power throws, nor can they withstand too many hits from opponents. Three of these players will occupy the inner court, along with the team captain.

This player is the most important member of your team. (In the Japanese version, this is Kunio himself, and thus the main character.) He is much more powerful than the other members of the team, both offensively and defensively. He is capable of withstanding many more hits than the regular players, and he is the only member of the team capable of performing a power shot. He isn't necessarily any faster than his teammates, in fact his large size is an unfortunate liability because he is a bigger target. For that reason, you'll want to try to shield him with other players if you have no alternative. Losing him from the match will make it much harder for you to compete, especially in the later stages of the game.

Three players are positioned around the outside edge of the opponent's side of the court. Likewise, you will see three opponents positioned around the outside edge of your side of the court. These outer players aren't as useful, but they do have a role to play throughout the game. For one thing, if a ball goes out of bounds, it is fair game for any of these outside players to run over and pick the ball up. From there, they can either attempt to hit an opponent inside the court, or pass the ball to another teammate. While they aren't capable of running with the ball, they are allowed to jump and they're still capable of doing a small amount of damage, especially to players who are stunned and trying to catch their breath. 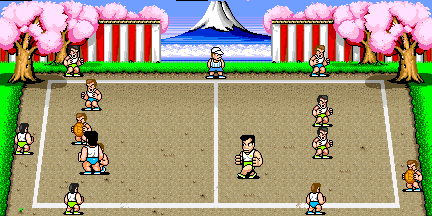 There are five types of shots in the game. They are listed here in order of weakest to strongest: 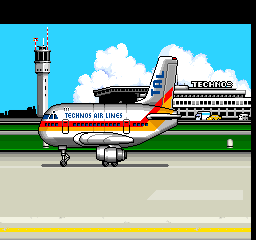 Travelling by plane to the next battle

Protect the captain
The captain is your most valuable asset, as he is capable of doing more damage to the opponents than any other player. For that reason, you should favor him by passing the ball to him as frequently as possible, and shielding him from attacks. To pass the ball to him, have an inner-court player stand to his right, and pass the ball back to the left. To shield him, move a smaller player in front when the opponents have the ball.

Catch the ball
If the opponents throw a normal shot at you, whether jumping or dashing, the best strategy is to catch the ball. In order to catch the ball, you must be facing the direction that the ball is coming from (so if it's coming from the outer-court, you may have to face left or right, depending on the location of the thrower) and you must press the throw button within a second of the ball reaching your hands. If you press the button too soon or too late, the ball will hit you and do some damage.

Be aware of who you control
The game doesn't necessarily allow you to choose who you are in control of. When the ball comes to a stop, control is typically given to the player closest to the ball. This is indicated by the red arrow over the player's head. To control any other player, you must pass the ball to them. Likewise, when you are on defense, you can't necessarily choose who you control. You are rarely given control over the captain while on defense, unless he is the last player available. This can sometimes make it difficult to anticipate how to react to an attack.

Gauging stamina
If a player is struck by the ball, but not removed from the game, you can gauge how close that player is to being eliminated by watching how long he tries to catch his breath. The longer he remains stunned, the closer he is to being eliminated. If the player takes five breaths, he's extremely close to getting knocked out. Use your outer-court players to throw the ball at stunned players and remove them quicker.

Replacements
As mentioned in the rules, computer controlled teams may have more than four players to eliminate, although no more than four will ever appear in the inner-court at one time. After a computer opponent is removed, if the computer still has replacements (indicated by the bars in the upper right corner of the screen), the next player (always a bruiser) will enter the court from the bottom of the screen, closest to the middle line. If you keep possession of the ball, it is possible to get very close and continuously bean the newly entering opponent and remove him from play before he can even fully enter the court.

Enemy power shots
Opponents can't perform the same power shot as your captain, but they have two different techniques at their disposal. One is a straight power throw that does tremendous damage. When thrown, the ball expands and contracts while it flies through the air. These throws must be avoided, they cannot be caught. The other technique involves throwing the ball high into the air, so that you cannot see the ball anymore, you can only see its shadow on the ground. The ball will home in on a particular player, and move in that player's direction. The ball may even double back in order to hit this player. To avoid it, simply keep moving. It's possible to catch this throw, but your timing must be perfect in order to succeed.