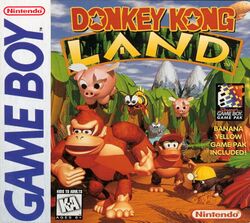 Donkey Kong Land (Super Donkey Kong GB/スーパードンキーコングGB in Japan) is a video game developed by Rareware for the Game Boy. It was released in 1995. Unlike the other games in the Donkey Kong Land series for the portable, this is not a port but in fact a completely original follow-up to the first Donkey Kong Country.

There were several gameplay mechanics that were changed to better suit the Game Boy. For example, only one character was displayed at one time because of the smaller screen, while the second one would teleport in when players needed him.

This time, a bitter Cranky Kong, jealous of all the success Donkey Kong and Diddy Kong have had from Donkey Kong Country, states that the only reason their first adventure was such a big hit was because of all the fanciful graphics and sound. He challenges that they'd never cut it on an 8-bit system, and then proceeds to get King K. Rool to steal the banana hoard once again.