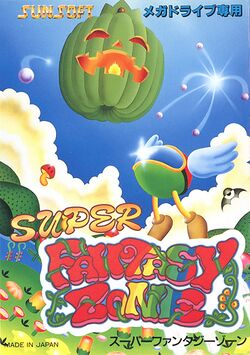 Super Fantasy Zone is a shooter developed by Sunsoft and published by Sega in 1992. It is the last addition to the Fantasy Zone series and was originally released for the Sega Mega Drive. It was originally released in Japan and then Europe, but not in the United States. However, North America would eventually receive the game in the form of a Virtual Console release on July 21, 2008.

The game is a free moving shoot 'em up, like its side-scrolling predecessors, and essentially has the same core gameplay as the arcade original.

The soundtrack to the game was composed by Naoki Kodaka, but also features themes from earlier Fantasy Zone games composed by Hiroshi Kawaguchi.

The game follows Opa-Opa as he fights to avenge the death of his father, (O-papa), who was killed defending the Fantasy Zone against the invading "Dark Menon". Opa-Opa must rid the Fantasy Zone of the minions of the Dark Menon and restore peace.