The second boss stage is an autoscroller through Bowser's army. At the end, you'll face off with Boom-Boom. 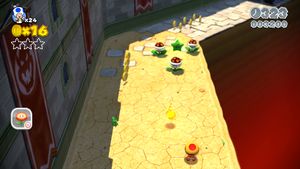 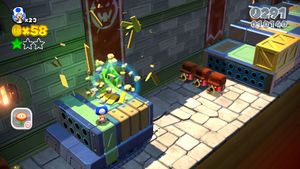 The second star is hidden within a box. Use a cannon, fireball, or tap to reveal it. 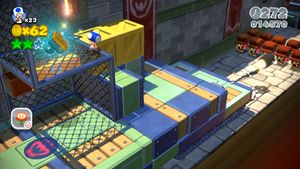 A cannon shot can break these crates even through gratings. Hop up for the stage stamp. 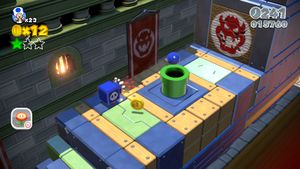 If you carry a cannon to the end of the stage, the back wall can be broken to reveal the final star.

This stage moves at a steady clip, so be quick on your feet. Get the fire flower In the first row of ? boxes, and when you reach the second row of ? blocks, use a fireball to break the crates and hit the rightmost block for a cannon box. This fires automatically, and you can hold run to charge a more powerful shot. Be extra careful not to get hit: There are no more of these after the bend, and you'll need one active to get a green star.

When the stage turns forward, you'll see the first green star guarded by fire piranhas. Dodge the fireballs and use the cannon to defeat them. The next batch of tanks has spikes on their front, so jump early to board them. The second green star is in a box on the second tank, and the stamp is up a grating on the third. Just ahead is the pipe to the boss, but behind that is a cracked wall. If you still have a cannon box, you can find the last green star behind it. 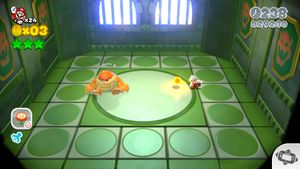 Dodge long enough and Boom-Boom will fall over. Strike while you have the chance!

Boom-Boom will spin his arms and slowly approach. Either jump or hit him with three fireballs to damage him. He'll retreat into his shell, and bounce around the room. Wait for him to stop bouncing, and the cycle will repeat two more times, with Boom-Boom occasionally turning invisible. Defeat him and head to the goal to rescue the second Sprixie.