The first castle level requires 10 green stars to access. Be prepared to face Bowser at the end of it! 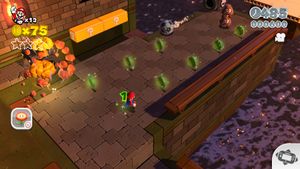 You may want to clear out the goombas before activating the coins for the first green star. 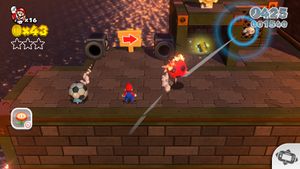 Having trouble aiming Mario's kicks? You may find a swipe of the touch screen easier. Knock down the wall to reach the level's stamp. 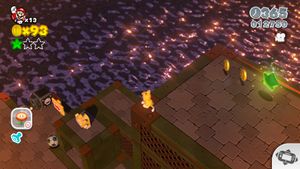 The second star is quite a ways up. Use the cat wheel or, if you're daring, climb directly up the thwomps. 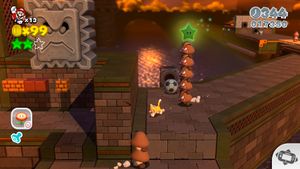 If you're lacking a bell, lure the goombas in front of the cannon to bring down the third star.

The first thing you'll see in this level is a pair of soccer-ball shaped kick-bombs. Kick them forward to take out the goombas and continue to the green star ring. Touch it, and collect the green coins to get the first green star of the level. Bombs shot out of cannons are safe right up until they start flashing, at which point touching them will cause them to explode. Grab the bell from the ? blocks and move on.

Up ahead is a taller goomba tower and some grey bricks hiding the stamp. Throw some bombs at them to reveal it. Above the stamp is a cat wheel you can spin to reach the second green star. If you've lost the bell, there's a spare one in the bricks behind the thwomps up ahead.

Beyond the thwomps is a tower of goombas with the last green star on top. if you're a cat, swipe at the base until it's reachable. Otherwise, try to hit them with a bomb. Once you have the star, you'll face a wall with three cannons. You'll need to reflect the cannons' shots to get over the wall, but beware - only the bombs fired from the center cannon can be safely kicked. 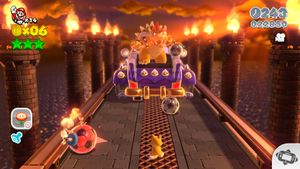 The back of the median is a safe spot.

Bowser has a fancy car this time around. This boss fight is fairly simple if you follow one trick: stand still, and none of Bowser's moves will be able to hit you. If you can reflect nine bombs (by swiping the touchscreen or kicking them) the road will collapse and Bowser will be defeated. Save the Sprixie and move on to world 2!