This level introduces Conkdors, which resemble drinking-bird toys. Dodge their pecks and jump on their heads to defeat them. 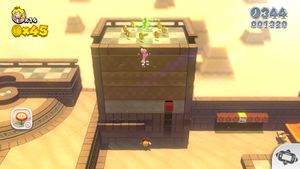 Climb the pillar right behind the bell to reach the first green star of the level.

Going right from the start of the level, the first ? block holds a bell. Get it, then scamper up the wall behind it for green star #1. Continue on, dodging the Conkdors until you see a greenish block. Climb that to reach a golden pipe. Inside, hit the switch and catch as many coins as you can before they fall down the pit!

East of there is a red ring you can complete for a cat suit. After that, run up the slope at full speed to reach the midpoint flag 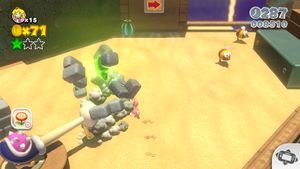 Be sure to acquire the second green star before taking this Conkdor out.

This level's stamp isn't far from the flag. 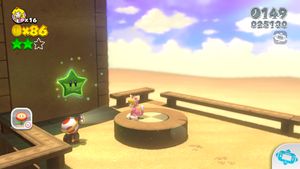 Captain toad rewards you with the final green star of the level.

North of the checkpoint, a shifting series of platforms makes a bridge. Cross it and get the power-up to reach a maze of narrow platforms. On the curved paths, the Conkdors will swivel to hit you, so don't stop moving! If you feel daring, defeat the upper-left Conkdor and you'll be rewarded with a trail of coins.

The next section has a Conkdor breaking grey blocks with its beaks. Make it break the top-right one for the second green star. To the left is a sand-waterfall: enter it and repeatedly jump to reach the top for 100 extra seconds and a coin-box powerup. This will spew coins as long as your character is in motion!

To the east the stamp is in plain sight, and farther east Captain Toad is in trouble! defeat the Conkdor that's 'chasing' him and he'll give you the third green star. Return to the stamp and cross the shifting bridge to reach the flagpole.