This stage introduces Double Cherries, which create clones of your character. 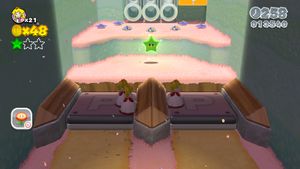 These switches must be pushed simultaneously to reveal the second star, and tapping the gamepad won't work! 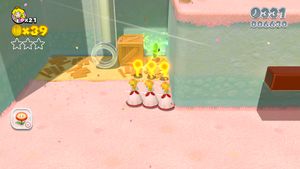 The first star is hidden in a crate.

Go straight ahead to pick up the first double-cherry. Now you're controlling two characters! They'll disappear with one hit, so be careful around enemies! At the upper-left of the diagonal blocks is a hidden ? block with a fire flower inside, and to the right of the clear pipe on the other side is another fire-flower. Break the blocks around the pipe for a second cherry and the first green star. Head up and through the green pipe.

In this section, use fireballs to take out the enemies, and place one character on each switch to get the stamp. If you have insufficient manpower, there's another cherry in an invisible block to the left of the clear pipes. Through the rightmost pipe is the checkpoint. 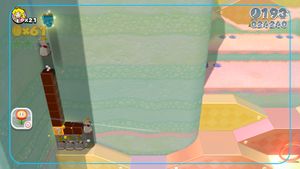 If you have no clones, you can also ground-pound or tap the ? box to go up. 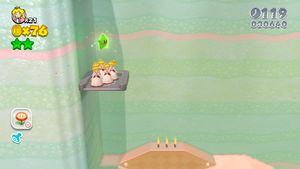 You need at least 4 characters to reach the last star.

On these hills are enemies carrying cherries, an invisible box at the lower-right with another, and a third cherry in the rightmost box in the upper-left. Some of these may not appear if there are already too many characters in play. The leftmost box will pop up when hit. Have one character stand above it and a clone hit it from below to reach the stamp. If you're currently solo, ground-pounding it will also work.

In the upper-right, after a red ring for a fire-flower, you'll need to defeat a fire brother to progress. If you want the third star, keep at least 3 clones alive when defeating him and go through the green pipe. The '4' platform you'll see requires 4 characters to activate. There's an invisible block with a cherry directly right of it at the base of the hill. If you have enough clones, use the platform to reach the last star, otherwise clear the level and try again.