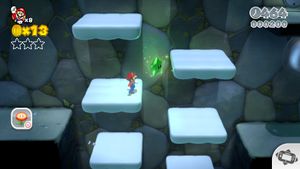 Head into the green pipe to start the level. The second question mark brick inside the cave contains a Fire Flower. From there, you can go down into a room with coins and a koopa, or climb on top of the clear pipe for some invisible coins. Before you exit this section, hop on top of the 10-coin block for a hidden 1-up.

In the next room, the first green star is hidden in plain sight between the moving clouds, and the checkpoint isn't far ahead. However, if you take the clouds all the way up there's a hidden path leading to a golden pipe containing three golden shells which give coins when thrown. 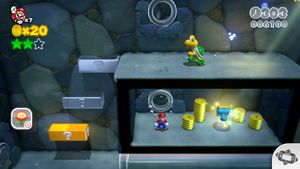 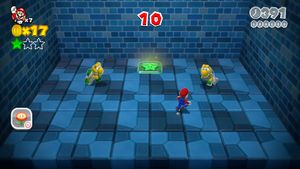 The second green star requires you to defeat two koopas in ten seconds. 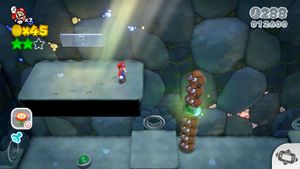 This invisible ? block holds an invincibility star. Use it to defeat the goomba tower and grab the third green star. 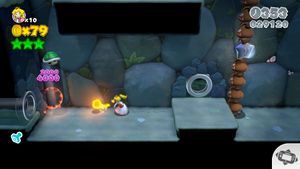 Low on lives? Shoot a koopa shell repeatedly with a fire flower. If you can keep it in the air long enough, it will break and give a 1-up!

Behind the checkpoint are two hidden blocks, the upper one holding a fire flower. The path splits into two sections to the right. The upper section contains a challenge box for the second green star, while the lower has another fire flower. These paths converge in a clear pipe to the next room.

In this room, you can climb some invisible blocks and enter a pipe to reach the stamp, and the third green star immediately follows in a twer of goombas. Through the next pipe is the end of the level.