This stage is lit from the front: look at the shadows to find secrets! 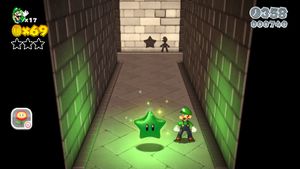 This shadow belies the location of the first green star.

After starting the stage, you'll see a pair of potted Piranha Plants. If you pick one up, it will eat everything in its path, making the stage much easier. Going behind some pillars, you'll see the shadow of a green star between the second and the third. Walk towards the camera to find it. Also, wall-kicking up the second pillar will net nine coins.

Up ahead is a cat bell, a bunch of fuzzies, and a couple of Fire Piranha Plants. Your potted plant will make short work of everything, even eating the fireballs. Move on to the midway flag. 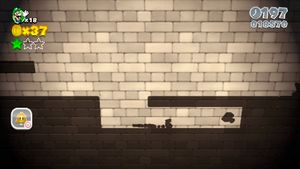 Lost the bell? Rolling with ZR+Y will also open the passage to the stamp. 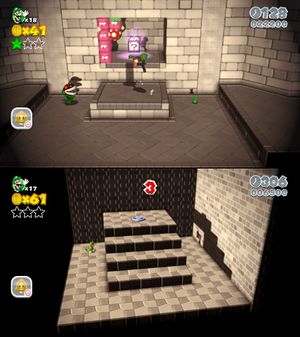 The switch lights up the side of the room, revealing the second green star under the stairs. 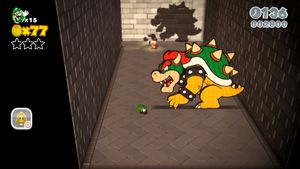 Much like the first Bowser fight, this prop poses no threat whatsoever. Smash it, and Captain Toad gives you the final green star.

After the checkpoint, you'll enter a door leading to a sidescrolling area where you can only see your character's shadow. You'll get another potted piranha, so take out the fuzzies and grab the bell. The giant piranha can't be eaten, so defeat it with jumps or swipes, or claw your way through the wall under it to get the stamp and sneak past it.

Back in 3D, pink clouds cover up a challenge box: tapping or blowing will temporarily stun them, but the nearby Potted Piranha will take them out for good. Inside the challenge box, hitting the switch will change the lighting, showing the location of the second green star.

Continue through the level, but before you take the final door, go through the passage in the right wall to find Captain Toad. He's cowering from Bowser's shadow, but walking towards the screen reveals its true nature. Give it a tap to defeat it for the third green star. When you're done, go through the door you skipped and finish the level.