The first level in Super Mario 3D World, this level is fairly straightforward. 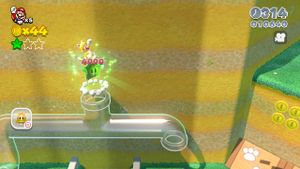 Use the analog stick to jump out of the pipe for the first green star.

From the beginning of the level, go straight ahead and hit the ? block to get a cat suit. From there, the level turns right and you can travel at a few heights. The bottom path only has some coins (including 3 in an invisible block; you can blow on the mic to reveal it.) The middle path contains a clear pipe with the first star above it. If you're still a cat, you can climb the back wall for 8 coins.

Once the paths converge, don't go through the clear pipe immediately! The goombas will also go through and hit you. If you make it past them, another pipe will take you to the checkpoint. 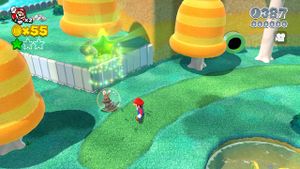 Tap the rabbit near the checkpoint to stun it, and catch it to get the second green star. 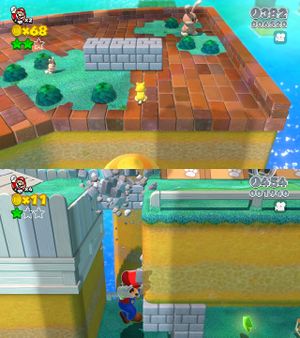 Climb the tall tree next to the green pipe to find a huge rabbit. Catching it will give you a mega mushroom, which lets you break grey blocks. Speed across the bridge to break the ground and find the third green star. 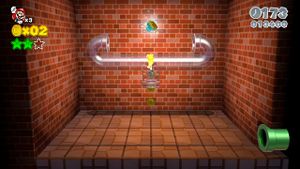 This room, down a green pipe, contains the level's stamp.

In the immediate vicinity is the rabbit with the second star, a green pipe leading to the stamp, and a tall tree leading to the mega mushroom you'll want for the third star. In addition, the nearest tree has a bell on top. Once you're done with this area, head forward and right to a bridge. The cat goomba guarding it has another bell, if you still need one.

If you break the blocks at the base of the bridge with a roll (ZR/ZL + X/Y) or by tapping them, you can go under it to get a 1-up. In addition, the bricks making up the railings of the bridge contain coins. Use a roll or a tap to grab them! Past the bridge, take either the pipe or the wall up to the flagpole. If you're small at this point, the rightmost tree behind the flag contains a mushroom.