Switchboard falls is a cliffside stage with plenty of tracks to ride. 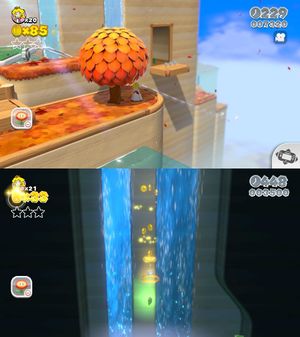 The balcony holds a pipe with a long drop inside. If you don't mind missing some coins, you can ground pound immediately to hit the star, guaranteed.

Switchboards will move in the direction you're standing on. Take the first one down to a pool area and go up the cliff to the left to find 8 coins - and a hidden 1-up in the center of them. The upper ? block immediately to the right of that hill holds a fire-flower. Use fireballs to safely kill the Fizzlits, or jump when they aren't electrified. Ride the second switchboard and hit the red ! to switch the track and cross the pool.

In the middle of the suspicious bricks to the left are two rows of invisible ? blocks, with a power star in the upper one. Grab it, and head forward. The next switchboard is across the water. Use the touchscreen to bring it into position, and then hit the ! block to set the path to a long downhill ramp. Halfway down, jump onto an overhanging ledge and enter the pipe to reach a long drop. You'll find the first green star almost at the bottom, and exit right next to the checkpoint. 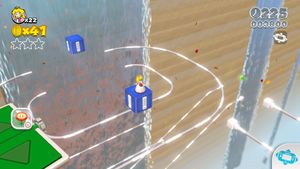 After dropping from this area, head up the first slope for the third green star. 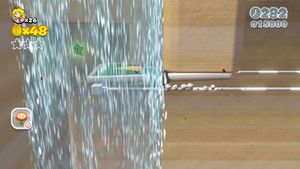 Duck under the wall to find the second green star. 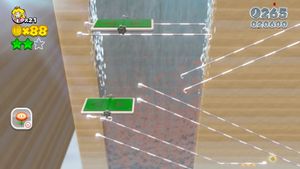 After the drop, hop onto the lower springboard to reach the level stamp (bottom-right corner).

After avoiding some Fizzlits, you'll come across a whole bunch of switchboards and a red ring that gives a fire flower. Take the last platform behind the waterfall, and drop down to find yet another platform. If you duck, you can ride it under the left wall to get the second green star.

To the right, hit the first two switches, then wait under the second until the Fuzzlers are at the near corners. Quickly hit the second switch again to drop them, and hit it a third time to reach the final switch. That one will open the floor and drop you onto a sidescrolling section.

Head right, and if you want the third star, be prepared to tank a hit from a Fuzzler as you climb the hill. From there, go all the way left and you'll see another switchboard. Hop onto it to reach the stamp, before crossing a few more platforms to reach the level exit.