Tiny-Huge Island is the thirteenth course in Super Mario 64. Mario will be either on the small island if he enters on the left side, on the giant island if he enters on the right side, and the island will switch sizes if he goes through a pipe. The entrance room has three offshoots, one to the small painting (to the tiny island), one to the large painting (to the huge island), and the third one is normal-sized, except that you cannot enter it.

"Normal-sized" Yoshi
In Super Mario 64 DS, if you are playing as Yoshi, you will need to grab the Super Mushroom to destroy the giant Piranha Plants.

Enter the course on the small island, and long jump twice to the left. Jump in to the pipe and become "tiny". Kill all of the giant Piranha Plants by attacking them. There are five flowers total, and a simple punch will kill them. However, they breathe fire, so if you get hit, be extra careful not to fall in the water - the giant fish down there can swallow you whole.

Star 2: The Tip Top Of The Huge Island[edit] 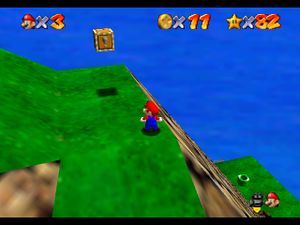 The star is in the gold box.

Make your way to the top of the huge island. The star is in a gold ! box, just below the apex. It is easiest to start the ascent on the tiny island and go to the huge island near the top.

On the tiny island, make a charge towards the pipe to the left, and drop down onto the ledge behind it. This triggers a purple button that reveals a bridge for a few seconds. Use a backflip to jump onto the cannonball ramp where you can reach the upper pipe.

If you want to complete the level on the huge island, you need to go through the wall, and swim across. Use the windy bridge until you reach a bridge leading to the cannon ball ramp. Cross it, and hug the wall as you climb the ramp.

There is a Chuckya waiting a few ledges above the big-island pipe. If you aren't careful, he will throw you all the way back down.

Star 3: Rematch with Koopa the Quick[edit]

Super Mario 64 DS
Like the last race, Koopa will only race Mario.

The easiest way to win the race is to use longs jumps throughout the entire race - until you get to the windy bridge. Once you get there, just stay on the ground and run. You should have enough of a lead from your long jumps to win.

Find all five secret spots when you are on the tiny island. The spots are all holes that Mario cannot fit inside.

The star will appear on the floating island beyond the big/small pipe on the lowest level. Go to the area where a tiny Piranha Plant appears. Near that area is a switch. Step on the switch and a number of orange boxes will appear which you can walk across to get to the star. Incidentally, if you go there and there's no star to grab, you can walk to a corner of the island marked with a coin and stand there to teleport back to the main course.

On the tiny island, hit the switch and make some bricks appear. Walk over to an island. Wait for Klepto to fly over, jump up at him, and grab your Star.

On the big island, go through the small tunnel and swim toward the area with the cannon. Launch out of the cannon to the tree up above. Walk across the thin, long plank and enter the cave. (Alternative: Either get the turtle shell and ride into the cave or do a wall kick after a triple jump.) The coins are inside. Jump onto the various platforms carefully to get all eight red coins. 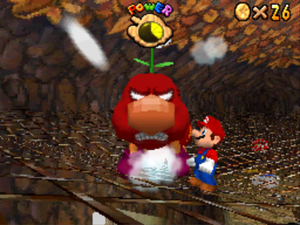 In the DS Version, Wiggler will turn red after two hits.

Go to the top of the mountain on the tiny island. Ground pound the middle of the summit to create a hole and drain the water. Carefully make your way down and go into the pipe to Huge Island. Make your way back up to the summit, where there should be a hole to enter. You'll end up in Wiggler's hideout, where he will promptly attack you. Avoid him trying to run into you and jump on Wiggler's head to harm him. With each hit, he'll run around the arena faster. Jump on him three times for the star.

On the big island, swim over to the cannon. Fire yourself at the tree and walk the wooden plank and make your way into the cavern where the red coins are located. To the left of the exit is the Star Switch. Step on the Star Switch and jump your way over to the Star, which is in the northwest corner of the cavern.

Super Mario 64 DS
There are various coins seemingly missing in the DS version of the game. There are three more posts where the Big Venus Fire Traps are, so run around them for five coins each. That should give you enough.

There is a coin near the Big Steely generator that is underground and normally impossible to collect. Change views around the generator and you will find it. Walk up to the right side of the generator into the corner between it and the mountain and Mario's feet will go slightly into the map just close enough to collect it.

The following is a list of where to find all 8 1-Up Mushrooms in Tiny-Huge Island.