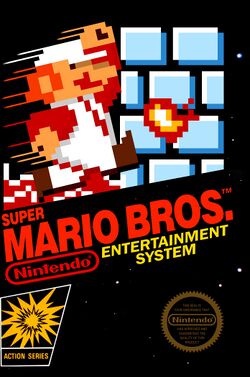 Super Mario Bros. is one of the most influential games ever released in the history of video games. It was first published on the Famicom in Japan, and on the Nintendo Entertainment System around the world. It was the number one selling Famicom game released in 1985, selling approximately 6,810,000 copies in its production cycle, over four times as many as the next best selling game, Soccer (NES). It was one of two games that were largely credited with reviving the depressed video game market in the United States, which had plummeted around 1983. The other game credited was The Legend of Zelda, and both games were the creation of world recognized game designer, Shigeru Miyamoto.

In a land far beyond human imagination, lies a magical place called the Mushroom Kingdom. The Mushroom Kingdom is always sunny, and food is plentiful year round. The Kingdom was ruled by a gentle and peace-loving Mushroom King and his daughter, Princess Toadstool (who would later come to be known as Princess Peach.) The Mushroom people were living peacefully, and all was bliss.

Then one dark day a tribe of evil turtles named "Koopa" led by the tyrannical King Bowser invaded the tranquil Kingdom. There was a terrible war. The Mushroom people fought courageously, but they were no match for the vicious turtles. They were easily defeated by the Turtle Tribe, and horrible Bowser's black magic turned all the Mushroom people into stones, bricks and even horsehair plants. Princess Toadstool, the only one with the power to free the Kingdom from the evil power of Bowser, was captured and exiled to a deep dungeon in a faraway castle.