The first, and most important, tip of conquering the worlds of Super Mario Bros.: Know your enemies! Learn the diabolical personalities of all your opponents. Each enemy has a different attack pattern. You'll attain a high score only by judging your enemy accurately, and adjusting your attack to its behavior.

The Koopa clan is made up of 17 species. The only thing they have in common is their desire to get Mario and Luigi! They all have different ways of accomplishing this goal. It's important to know all of their attack patterns. Watch out, some of the Koopa clan are indestructible. 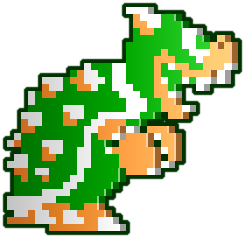 At the end of each world, you must face Bowser, the evil King of Koopas. At first, his only tricks are breathing fire and jumping around. Later on, he throws hammers at Mario to slow him down. There are two ways to defeat him:

Get the Axe: 0 points. Once you get the axe, the bridge automatically topples and Bowser falls into the sea of fire below.
Repeating fireballs: 5000 points. The trick is to shoot Bowser with five fireballs in a row. However, you have to be skillful to dodge his attack while you're trying to blow him away!

If you are desperate, you can sacrifice your power to clear the area. When Super Mario becomes small as a result of enemy attack, he also becomes invincible for a short while. Use these valuable moments to quickly sneak past the unsuspecting Bowser, and get the axe.

Once you defeat Bowser, you're supposed to find the fair Princess awaiting you. But alas, the Princess is held in another castle much farther away, and only her retainers are in the castle to greet you. The adventure continues!