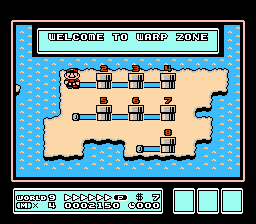 The warp whistles are the Super Mario Bros. 3 equivalent to the Warp Zones from the original Super Mario Bros.. These items, when used, take you to a special warp zone map, which allows you to warp to another world (pictured on the right). There are three paths, and which one you land on depends on which world you use the warp whistle in:

In Level 1-3, progress through the level until you come across a white block (there's a red Koopa Troopa walking on it). Kill the Koopa Troopa, then stand on the white block and duck down for five seconds, you will then fall behind the scenery. Now, quickly run to the end of the level and you will be taken to a Mushroom House where you can get the warp whistle from the only treasure chest.

Enter the World 1 Fortress as Raccoon Mario/luigi (or collect the leaf at the beginning of the level). Progress until you see the ceiling open up. From here, get some velocity and fly up to land on top of the ceiling. You can't see yourself, but run to the end, then press

and you'll appear in a secret room with a treasure chest which contains the warp whistle.

One of the Boomerang Bros. in World 2 leaves behind a Hammer when defeated. Use the Hammer item on the top right corner of the map to reveal a secret path going to the right. There, beat the Fire Bros. hiding in this part to acquire the last warp whistle.