Take a deep breath before diving into a submerged fortress with claustrophobic corridors. This water-filled fortress is the home of another new enemy, Stretch, a ghost who hides under the floor, ready to ooze out and scare you. He can't be defeated, so you have to sneak by him with care.

Raging floods and fearsome fish force Mario to climb a vine to higher ground. This is one of the toughest stages in the game. Boss Bass is back, the tides go deeper and leave you nothing to stand on, and the island are smaller. You have to get to the safety vines fast!

Cannons and Bob-ombs crowd a secretive stage of tricks and traps. There are a couple of neat tricks you can try in this world, but be warned: they are somewhat difficult to pull off!

Wendy O. Koopa awaits you in the fearsom airship. Send her plunging to the water world below! You can jump over some of the walls in this warship, even though the gap you go through is off the top of the screen. This can save you a lot of time and effort. 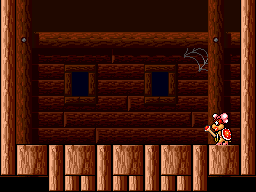 Wendy O. Koopa is the only girl of the Koopa family, and she's one ferocious female. As the ruler of Big Island, Wendy is known as an unbearably bossy Koopa with a sweet tooth. Get ready to dodge some candy!

Onward to the land of the giants[edit]

The Island World was tough, but Mario made it through and returned the king to normal. Off in the horizon, Mario can see Giant World coming up. It looks pretty overwhelming!