Guided Missile Bills guard the fabulously furry Tanooki Suit. You have to like the Tanooki Suit. Not only is it cool looking, it gives Mario the same powers as the Raccoon Suit, as well as the ability to turn into a Statue!

Statue Mario is a powerful form
The Tanooki Suit has the power to turn into an invincible Statue for 5 seconds. But it's not generally know that this power can be used offensively against enemies like the Lava Lotus. Statue Mario can even fit through small gaps!

Step through Magic Doors to enter alternate dimensions big and small. Here's a stage where you can change the size of giant enemies. Two magic doors accomplish this feat, and also make different items come out of the ? Blocks. In effect, this stage contains a giant side, and a regular side. This being Giant World, you naturally begin the stage on the giant side.

Don't dawdle on a Donut Lift, or you'll be in for a very hot bath. A Switch Block will reveal the way to a Hidden Quarter of the Fortress which gives you a chance to gain some extra coins and, of course, 1-Ups; plus some extra practice with pipe maze tactics that will come in handy in World 7.

It'll take quick wits and iron nerves to traverse Iggy Koopa's enormous rocket-powered airship. Unlike the other Koopaling's Airships, Iggy's ship has no cannons or Bullet Bills, only thrusters, but it can be tricky! 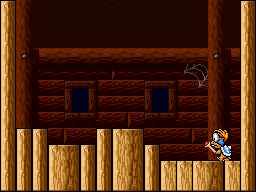 Iggy Koopa's wand isn't as dangerous as his sister Wendy's, but he fires it rapidly and the uneven terrain can make dodging difficult. Iggy may look like a bookworm, but he's no genius.

Another grateful King bids Mario good-bye. Mario's next challenge will take him into the clouds in Sky World. The Princess, thoughtful friend that she is, left a P-Wing behind for Mario to use. And he'll need it in the Sky!