Some stages have it all: ice climbing, ice diving, and ice gardening. Either the P-Wing or the Frog Suit will give you a bonus in this world.

A cold snap has frozen Bowser's coins and the Munchers that protect them. If you bring the right kind of fire power in this stage, you can trade it in for an upgrade if you know where to look.

Forget the gym—you're bound to break a sweat on the conveyor belts in this foreboding fortress. The Ice World is well fortified indeed! There are three Fortresses, and this one is the worst! All the enemies here, Roto Discs, Stretch and Thromp, are invincible.

A villainous circus performer schemes in his airship. Give him an unforgettable performance. Lemmy's Ship has a couple of places where it appears that Bolt Lifts are the only way to go, but in both instances you can make it by hold down

when you jump. It can be tricky. 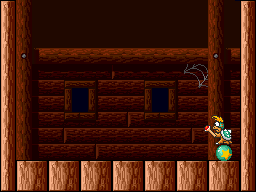 The Clown Prince of Koopas would rather join the circus than rule Ice Land, but he has an obligation to protect his tyrannical Koopa family from Mario, our pasta-eating plumber protagonist.

It's onward to warmer climates[edit]

The troublesome Ice Country behind him, Mario can look forward to the more temperate Pipe Maze (known as Pipe Land in the original NES version, alternatively known as Tube City in the Nintendo Power Strategy Guide) ahead. Unfortunately, Piranha Plants like warmer temperatures too and it looks like the Pipe Maze is overgrown with them!