Navigate a gnarled pipe maze to reach the goal before time runs out. Distinguished by its length, you'll really have to watch your timer on this one. Don't go after bonus items unless you have plenty of seconds. Among the items available here are 3 Fire Flowers and a 1-Up.

Piranha Plant-infested pipes for the only bridge across a sea of frothing lava.This Fortress can be a real terror. There are lots of Piranha Plants, Thwomps, Boo Diddlys and Roto Discs. Precise jumping is essential. Wear a Hammer Brother Suit if possible.

The tyrannical botanicals have grown back as the last obstacle before the King's Castle. This Piranha Plant mini-world looks impressive, but it's actually pretty easy. Try to make it past the first field of Munchers in one leap.

With one look into the eyes of the cruelest of Bowser's Koopalings, you'll be scared stiff. Ludwig von Koopa's airship is the Koopa fleet's flagship. It doesn't have any cannons, but it's loaded with tricky jumps and Bolt Lifts, and manned by Ludwig's scurvy crew of Rocky Wrenches.

A piece of advise: This would be an excellent place to use P-wings. There are no flying bullets to hit you in the air, and it will make the long, dangerous task of this ship a piece of cake. Also, this Koopa would be easier to defeat from the air since his leaps will stun you into inaction when you're touching the ground. 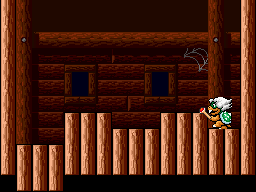 As the oldest and meanest Koopaling, Ludwig von Koopa is also the most formidable. He is second in command only to Bowser himself, so expect a ferocious fight.

Although he was a little tougher to beat than the average Koopaling, Ludwig has been defeated. But what's this? The next letter you receive isn't from the Princess; it's from Bowser! The fiend has taken the Princess to his underworld domain.