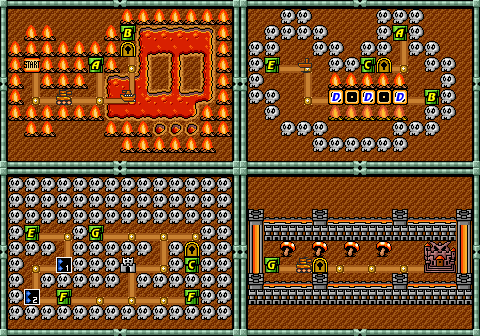 Ludwig von Koopa is kaput, and only big Bowser, the terrible king of the Koopas, stands between you and the princess. To get to Bowser, you'll have to defeat an entire Koopa army.

There are no Toad Houses or Hammer Bros. in this world. There isn't even a secret White House to be found. You will obtain from the end of just a few stages, including the hand bridge guarded by giant hands. If you have any P-Wings saved up, they can really come in handy for certain stages.

Bowser has called in the heavy metal, and they're rolling right toward you. Bowser's pulling out all the stops in this last world, and the challenge has never been greater! A parade of Koopa's finest tanks will fill the air with flying lead. You'll need to use fancy footwork to evade the hail of bullets!

In Super Mario Advance 4, this level was shortened, with the removal of the first two tanks after the ? Block.

An armada of Bowser's armored warships sets sail to stop you. A finer trio of battleships has never graced the seas. Like everything else in Bowser's underworld, these ships are armed to the teeth.

In Super Mario Advance 4, one cannon was removed.

A monstrous hand pulls Mario into a trap. There are three Hand Traps. You'll have to fight your way out of this one. The flame lined bridge leads further into Bowser's underworld. It looks safe to cross, but no sooner do you step on to it than a monstrous hand reaches out to grab you and take you into a mini-world. If you're lucky, you can make it through without being snatched, but you may want to hesitate on the bridge and get captured on purpose; for each trap that you finish, you'll get a Super Leaf!

You'll have to defeat all the members of the Hammer Bros. family here to make it the goal. They should be easy for you to deal with by now.

Make it over a broken bridge harassed by Podoboos, and you deserve that Super Leaf! Actually, it's a pretty easy stage if you take your time.

A swarm of attacking Cheep-Cheeps will make this the most challenging of all the Hand Traps. It's also the longest. Use the

button run to get through, and don't be distracted by the meager coins in the ? Blocks.