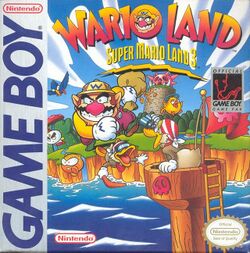 Wario Land: Super Mario Land 3 is a platforming video game developed by Nintendo on the Game Boy in 1994. It is the first video game to feature Wario as both a playable character and the main character, as well as the first appearance of Captain Syrup and her Brown Sugar Pirates, a common villain of Wario's. Despite the Super Mario Land 3 subtitle, Mario has very little to do with this installment in the series.