The Toadofsky sidequest allows you to get a membership card for the juice bar in Tadpole Pond, allowing you to purchase more items at a cheaper price.

Read the sign on Frogfucius' island to see "So La Mi Re Do Re Do Re"; when you jump back across the tadpoles, run to the southeast and take the pathway into Melody Bay. This area is a small mini-game like area where you can receive the Alto Card from Toadofsky (the composer on the northeast side of this area). He can also give you some information about the mini-game, but to get it done, simply go back to the southwest side and step on the stone there. 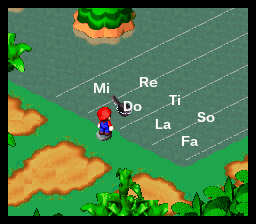 To compose music, you will place the tadpoles in a sequence which will then be replayed after you set them all up. If you place them in the correct positions, you'll receive the Alto Card (an item that lets you into an area much later in the game). When you step on the stone on the southwest side of the pond, a tadpole will appear and begin swimming along the width of the staff. From the top, the notes are Mi, Re, Do, Ti, La, So and Fa.

When the tadpole has landed on the place where you want it to stay, press

to jump on it. You should do this just when the tadpole begins moving towards the place where you want it to stop, otherwise you might end up jumping on the location just after the one you wanted. To receive the Alto Card, place tadpoles on the following locations: second to bottom line (So), space just above the second to bottom line (La), top space (Mi), second to top line (Re), second to top space (Do), then Re, Do, and Re once more. If done correctly, Toadofsky will be extremely pleased and will rush off after giving you the reward.

You can return later to receive additional cards. Once you complete Moleville, you can enter a new song, "Mi Do So Do Re La Ti Do" for the Tenor Card. Once you’ve visited Monstro Town and listened to the song of their star you can come back and enter that song here for a soprano card (La Ti Do Re So Do Re Mi). You will then be offered the opportunity to finish the masterpiece with a measure of your own creation.

Squaresoft, the company that co-produced Super Mario RPG, is also the producer of the Final Fantasy series, thus the appearance of Culex.

Using the "Shiny Stone" on the sealed door in Monstro Town reveals a hidden boss named Culex. Contrary to popular belief, the Culex character is not from any particular Final Fantasy game and instead simply represents a sort of generic "Final Fantasy-ish" boss.

Go to Monstro Town. At the right side, climb the stairs and go through the door.

As it seems, Jagger, a former member of Bowser's Koopa Troop, is inside, who has been studying under his sensei Jinx. After the conversation is over, run up and talk to him and he will offer you a challenge, accept it to get into a fight. Jagger is fairly easy, just beat him up with your physical attacks and he should be gone in no time. As it turns out, Jinx has been watching the fight all along. Speak to him and he will challenge you as well, accept the challenge to fight him. He is essentially a slightly stronger Jagger, but should still be no problem.

He says he underestimated you and wants a rematch, so talk to him again to accept the offer. This time it's a bit harder since he uses more powerful attacks including Silver Bullet, an instant death attack. You may want to cast Geno Boost on Mario to give him some additional strength in this fight, otherwise just punch his lights out. He asks you for another rematch, talk to him to accept it. This time it's a real challenge, since he uses very powerful attacks such as Bombs Away, which may one-hit KO your characters just by its sheer power. You'll probably want to Geno Boost everyone and use Toadstool's healing abilities frequently. You can use the Lazy Shell armor but usually, you won't really be needing it.

Once you win this fight, you get the Jinx Belt, which gives some decent bonuses and protects against instant death attacks. Jinx will also proceed to rename the dojo after Mario and incorporate his jumping techniques. 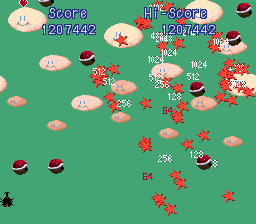 After you have gotten the sixth star, return to Mushroom Kingdom and go to the inn. At the back you'll find a boy playing a handheld game. Talk to him repeatedly and he will offer to sell the game to you for 500 coins. Accept the offer and you'll see a new option in the pause menu, Game. Toad will explain the controls to you if you wish, after that select the option to play the game.

This game is a shooter game. You control a beetle and you have to shoot at the Red Shells bouncing around the area. Use

to move left and right, and press

to shoot stars. Once a Red Shell is hit, it will release stars as well which can themselves hit other Red Shells and start a chain reaction. If you're hit by either a Red Shell or one of the stars, press

repeatedly to recover. Note that the more often you get hit, the harder it becomes to recover. When you did a large enough combo, a heart will drop from above, collect it to restore some of your life, it will disappear soon after it has landed so be quick. To pause the game, press

The game keeps track of your current score and the highest score. Every time a Red Shell is hit, you get one point. If the stars of this Red Shell hit another, you get two points, if those stars hit a Red Shell, you get four points, and so on until 9999 points, which is the maximum amount of points you can get in a single hit. The score at the top goes up to 99,999,999 if you really wish to play that long. To end the game, simply be hit and don't recover, you'll then be given the option to end the game.

After you have gotten the fifth star, return to Booster Tower and climb it. On the way you'll find Knife Guy, who is willing to play a game with you. In this game, he juggles balls really fast and you have to guess which hand the yellow ball is in. At the beginning you get rather worthless rewards, but they will improve as you win more frequently. Win twelve times (losses count against you) and you will get the Bright Card.

Now, go to Bean Valley and proceed until you find an area where there are five pipes arranged in a star shape. Wait until the Shy Away waters the top pipe, then beat the enemy and go down the pipe. Once there, you'll find a Chomp Chomp in the corner. Beat the enemy, then go in the left corner where it was and jump three times to reveal a platform and a secret passageway. Follow it and you'll return to the World Map with a new area available, Grate Guy's Casino.

Go there, and enter the house. The guys at the beginning will only let you in if you have the Bright Card. Inside, you can play three games. At the left you can find a slot machine where you can challenge your luck for 10 coins. At the table, you can play a game of Blackjack for one Frog Coin. Finally, at the back there's Grate Guy, who will play "Look the other way" with you. Essentially, he raises a finger in one hand and you must look into the other direction. Like Knife Guy, he gives you some pretty worthless rewards during the game. Once you win this game one hundred times (really!), he will award you with the Star Egg. This weapon does 100 damage on all enemies and can be used indefinitely, so it is definitely very useful in some fights.

Go to Land's End, and go all the way to the area with the spinning flowers, but instead of jumping up the cliff, go around the side and follow the path there. In the next area, walk to the left and you'll see a large hole in the mountain, jump inside to enter. Once there, follow the path - there are some Geckits guarding but you can easily jump over them. At the end, there is a springboard, jump on it to get to an exposed area of Kero Sewers, where you can jump across the arch to get to a Treasure Box containing Cricket Jam. Take the Cricket Jam to Frogfucius in Tadpole Pond and he will give you ten Frog Coins for fulfilling his wish.