Everyone's favourite moustachioed Italian plumber is in a new crazy adventure that he never intended to be a part of. At first, Mario has planned to spend time with his loved one and friends. But next thing he knows, he has to clean up a mess that he was never part of in the first place. Mario befriends a new gadget made by the crazy E. Gadd to help him save the island of Delfino. 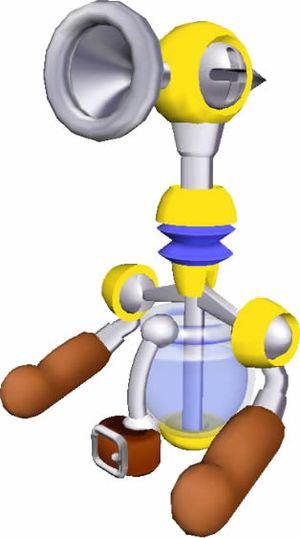 FLUDD could be described as an item rather than a character, but as it/he/she can talk, that surely promotes it to character status. FLUDD is probably the most important character in the game as it cleans up graffiti, reveals coins and Shines, defeats enemies and gets Mario to places that he just wouldn't be able to reach otherwise. It was invented by Professor E. Gadd (of Luigi's Mansion fame), and comes with two nozzles attached - the spray nozzle and the hover nozzle - but there are also two other nozzle attachments that can be found as you progress through the game, the rocket nozzle and the turbo nozzle. Head on over to the Controls section to find out how to use FLUDD.

Mario's dinosaur buddy returns, but not until the later stages of the game. He is essential for completing some the missions, with his excellent jumping skills and his ability to spit fruit juice and eat bad guys. When you see a Yoshi Egg lying around, feed it the fruit that it wants to hatch a shiny new Yoshi for you to ride on. Make sure you keep him topped up with fruit or else Yoshi will disappear! He is also essential for unlocking certain worlds that are unable to be found or gotten by Mario alone, such as Pianta Village or Serena Beach. Corona Mountain is unlocked by beating all Shadow Mario missions.

Peach is the Princess of the Mushroom Kingdom with a tendency to get kidnapped, usually by Mario's most hated enemies, such as Shadow Mario or Bowser. She is also Mario's love interest.

Toadsworth is a Toad elder and is Peach's long-time steward. Although, he's clearly not too good at his job, judging by the amount of times Peach gets kidnapped. He has brown polka dots and an extremely large mustache.

There are many Toads, each with different coloured polka dots on their mushroom-shaped heads. They are Peach's attendants and often have useful bits of information for Mario.

Piantas are residents of Isle Delfino. The guidebook calls them the "Mountain People" and says of them:

"These mountain folk are strong, sociable and curious. The trees on their heads provide relief from the island's heat."

Nokis are residents of Isle Delfino that live near the ocean. There are not seen as often as the larger Pianta people. The guidebook says:

"Nokis wear vibrant seashells reminiscent of their time living in the coral reefs. They are timid but highly intellectual."

He is a dark-skinned man in a Pianta suit. He appears in some chapters to challenge you to a race and you get a Shine as a prize if you win.

There are two boathouses on Isle Delfino, one in Delfino Plaza and one in Noki Bay. The proprietors are animals that look like something between a raccoon and a bear, but more likely are meant to be Tanuki, a favorite of Japanese folklore. They are probably also a reference to some power-ups in other Mario games. You can trade Blue coins for Shines in the boathouse in Delfino Plaza; in Noki Bay you can get a boat.

The Delfino Emergency Broadcast System. Not an actually character but a source of information that scrolls across you screen in Delfino Plaza. D.E.B.S. will notify you when there is something new to investigate.