There are twenty blue coins that cannot be found within specific levels, except for one in the airport, they are hidden around Delfino Plaza itself.

Locate the building with the bell tower in the southeast corner of the plaza, in other words at the opposite end of the beach from the lighthouse. On the south side, over the water, is an open window. Hop from the ledge nearby and hover into the window to land in a room with barred windows. Liberate the coin that's doing time in there.

Look for a Pianta lady standing near a wall just south of the central dock. Talk to her and she offers you work collecting fruit for her. Gather three bunches of bananas and place them in her basket, then talk to her again to be rewarded with a blue coin. Bananas can be found in one of the fruit stalls, on a rooftop in the southeast corner of the square, and in the top of a tree west of the Pianta statue. Can be repeated for a 1-up.

Go to the boathouse in Delfino Plaza (where the portal to Ricco Harbor is) and look out to sea and you'll notice a small island with a palm tree and a Pianta lady. Swim out there and talk to the lady. She'll ask you for 3 coconuts, and as luck would have it, there are 3 coconuts hanging in the tree right next to her. Spray them to knock them down and then put the in her basket one by one. Don't worry if some of them fall in the sea as they will grow back again straight away. Can be repeated for a 1-up.

This woman is standing next to the giant Shine Gate north of the central dock area and she asks for pineapples. Her basket is high off the ground so you'll need to throw (jump + B) the fruits in. Finding the best place to throw from takes a bit of trial and error but isn't as hard as it seems. Alternatively, you can bounce on her head three times and if you land on the edge of the basket, you can then simply drop the fruit in. Can be repeated for a 1-up.

This is by far the toughest fruit lady challenge. Look for the Pianta lady to the left of the shine gate. She asks for durians and they are the spiky fruits that Mario can't carry, only kick around. So it's football time. 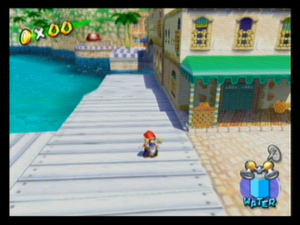 Get a durian here and aim it at the palm tree up ahead.

There are a few ways to get the durians to the basket but this seems to be the simplest. Get a durian from under the awning near the boathouse. You can also get durians from the fruit market but it's farther away. Gently kick it north along the boardwalk, then when you get close to the end aim toward the tree in the distance (this is shown in the picture on the right). If you run at the durian and press

just before you get to it, you will give it a mighty kick that will send it far into the distance, then hover over and see where it landed. Hopefully it didn't bounce into the water (if it did, just keep trying), so from here kick the durian through the archway and then go left to the little hill.

Getting the fruit up the hill can be very tricky because of the camera angles in such a tight space. You need to place the fruit at the bottom of the hill, stand directly behind it and the spin the camera around so it is facing Mario. Now run in a dead straight line up the hill with enough speed to get the Durian up there. Once you get up the hill, kick or spray the fruit into the basket. Now just do that two more times to get a blue coin as a reward. Alternatively you can repeatedly run and press

to dive to push the Durian up the hill quickly. Be careful that doesn't go over the wall and into the water under the shine gate!

Locate the large crate in front of the Shine Gate (on the right side). Ground-pound this crate to smash it and reveal a graffiti "M", then spray the wall clean for the coin to pop out.

Locate the large crate on the rooftop over the inlet between the central dock and the ocean. Ground-pound this crate to smash it and reveal a graffiti "M", then spray the wall clean for the coin to pop out.

Go to the tower in the northwest corner of the plaza, near the red cannon that fires you over to Pinna Park. Look on the north side about about half way up to find a graffiti "M", then clean it off for the coin to appear.

Locate a graffiti cross on the east side of the base of the Pianta statue (right of the Bianco Hills entrance). Locate a corresponding cross one the west side of the southwest tower (the one with the radio dish). Wash one cross off to make a blue coin appear at the other cross, then quickly get to the other cross to collect the coin before it disappears. The slip-slide move is very useful here for covering the distance in time, or wait until you get the turbo nozzle and use it. Do both crosses to collect two coins.

This might sound like the name of a refreshing cocktail, but after you open Gelato Beach there actually is a Pianta fellow running around wearing a backpack that's on fire! He normally is found on the beach near the lighthouse but may also appear next to the central dock. You need to chase him around with FLUDD going to put out the fire, then talk to him to be rewarded with a blue coin. After collecting the coin, the same Pianta can be seen wandering around with his backpack full of red mushrooms.

There are 2 blue parrots flying around Delfino Plaza which turn in to blue coins when you spray them. They fly around but if left alone they perch in the following locations:

The blue birds usually hang around with some green birds, and are very wary of Mario's presence so you'll have to squirt them from quite far away if you want to catch them sitting still. You can also wait where they would normally land and squirt them in mid air. When you squirt them they fly away for a bit and then come back to the same spot. A few good hits should be enough to turn them into coins.

The north end of a tunnel under the shine gate.

A tunnel under the main dock.

The underground passage that leads to the island with the coconut lady.

Go to the rooftops in the northeast section of the plaza, between the shine gate and the lighthouse. Look on the north side to find some orange goop covering a window. Get Yoshi and spray the goop with fruit juice and it melts away. You can now hop into the window and collect the coin there. When you re-enter the plaza the goop will be restored even though there is no coin behind it.

Go to the rooftops in the northwest section of the plaza, near the red cannon, and look on the east side of the tower to find some orange goop covering a window near the top. Get Yoshi and spray the goop with fruit juice so it melts away. Yoshi's fruit juice range is pretty good so you can to this from the next building over. You can now do one of the following:

Collect the coin when you reach the window.

Stone pillars in the sea[edit]

Locate the pillars a little out to sea from the lighthouse. One of the further-out pillars has a double door in the bottom of it, which hides a blue coin. Equip the Turbo Nozzle and smash through the double doors to get the coin.

Note, even though this is in the airport, it shows up in coin count for the plaza. You can only get this coin after you have entered Corona Mountain at least once (whether you defeat Bowser or exit stage).

Collect 10 gold coins in the plaza and talk to the Pianta by the boat at the southwest dock. Pay the fare to be taken back to the airport. You should see a turbo crate near the landing, so grab it and equip the turbo nozzle. Smash through the double doors of the building at the end of the landing to gain entrance to the airport waiting room. On the right find a block of ice. Switch to the squirt nozzle and spray the ice until it melts away leaving a blue coin.