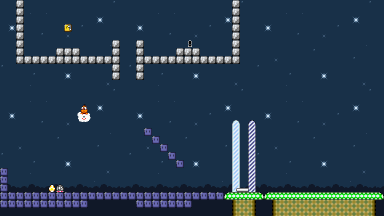 The secret exit is located at the very top. The key is hidden in the question block at the left, the keyhole is at the right.

To get there, you will need to knock out the Lakitu with one of the blue blocks. Since you'll need to be able to reach his cloud, do this either at the very beginning (where there is a small pile of blocks you can jump from) or use the sort-of staircase near the end. Jump in and float up to reach the key and keyhole. Of course, Cape Mario can just get some momentum and fly straight up himself.

There are no Dragon Coins in this level.