The Void! The Void is bigger! You need to find the heart pillar! Remember the sign in the outskirts? Go past it to a pipe covered with red blocks. Use Boomer to get rid of them and go down the pipe. Go all the way to the right until you hit a wall. Flip and use Slim to slip through the crack. You’re at the heart pillar! Go back to Flipside Tower (Shortcut: Use the Return Pipe).

Brings back memories, doesn't it? So peaceful. So retro. So NERDY! Some Dork just comes up and swipes Tippi! Ignore the bush. Come to it after you finish this dimension. Keep moving right until you find an unjumpable pipe. Flip around it and hit the <> block. Get on top of the pipe and hit the block to get a ladder. Climb it and go in the door. Hit the block to the right and become...Mega Mario! Crush everything to the right. By the time you’re done, you'll be at the door. Go through. Yet another Mega Star... but you don't get it? A koopa gets it and chases you. Go left and hit the ? block to get a Mega Star, crushing the Mega Koopa. Crush all to the right. Hit the blue switch and read the sign backwards "The red pipes fall in between". Go back to the original spot with the ladder. Go right and fall between the two red pipes. Keep travelling right until you reach platforms travelling up. Jump on one and jump from it to the highest platform on the right. Keep going and go in the middle pipe. Now travel to the right and bring down the fortresses. Go to the one with the red X and put Boomer next to it. It turns out, you just destroyed Bowser's new castle. He tries to fight you.

Bowser uses his fire breath to kill you. Each time you get blasted, you lose 2 lives. So be careful! If you are trapped between Bowser and the 2 walls Bowser creates, flip into 3d and run to the other side. You cannot attack Bowser in 3d.

Peach tries to urge Bowser to join. He eventually cracks. Now you got fire power. Bowser’s attacks have twice as much power as Peach and Mario's. Hit that star block. This will end the chapter.

It's best to keep Bowser because he can blow fire underwater. Go right until you reach the pipe. Flip into it with Mario. Change back to Bowser inside. Avoid tentacles and whirlpools while going right. Always stay on the ceiling and jump out when you reach land. Go down the pipe. Travel right and go in the water. Go right into the door. Kill all the enemies and open the chest. Thudley the pixl comes to grade your "girth". No matter who you are, he'll come with you. Use him to ground pound the pole into the ground and open the door. Leave back to the place with the whirlpools. Go right farther until you reach the next part of land. Note the formation in the picture. Go back to the first pipe and ground pound the 6 poles there in the same formation as the picture. Go through the door that appears. Don't even try to kill the Bittacudas while you travel right. You eventually meet the Big Blooper. 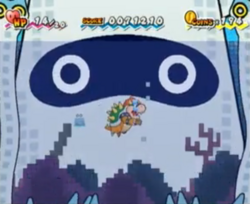 Stay as Bowser. Hit all of his blue tentacles that come up to send them down. Your real aim is the red tentacle. Wait for it to come up and hit it. Do this three times.

Travel right and go in the pipe. Now hit the star block on dry land. This will end the chapter.

Use Mario and Slim. Only try to hit him if he's close to the ground. Make sure to hit him before his magic thrust forms. Avoidance is a very important part, so concentrate on evading as well as attacking. When he splits in two and uses the Tri-shot, use Slim to avoid the trouble. Look closely for the real Dimentio and crush him.The real Dimentio is the one that when he appears he claps his fingers.To understand who he is you have to press and open the menu...look closely before the menu appears.

Go up the rest of the tree by jumping from platform to platform. Watch out for the spineys and Lakitu. Once at the top, ride the red wind to the pipe and go down it. Hit the star block. This will end the chapter.

Chapter 3-4: The Battle of Fort Francis[edit]

Go all the way to the right and flip. Go in the pipe and use Thoreau to throw the red and white block at the blue switch. Grab the key and leave. Open the door and go in. Go in the next door. Skip the big cat door (unless you want to peek in the keyhole for laughs) and go in the next door. Flip to 3-D and climb up the steps. Ignore the Surprismeow and go in the door. Go to the far left and ground pound to bring down the door. Go in and jump on the dark shade of the wall of the right side. Switch to Peach and glide to the next gray platform. Switch back to Mario and flip to get up steps. Ignore the Surprisemeow again and go through the door. Use Thoreau to grab the airmeow that comes over to hit the blue switch. Go across the new bridge and into the door. Talk to the cat-thing and answer true to everything. He'll ask you for a passcode. Answer any 4-digit number. He'll dump you in the dungeon, but that's good. Use Thudley to kill the Chain-chomp. Pick up the block with Thoreau and throw it on the red platform. Go on with it. Now run to the pipe before it goes down. Hit the <> block and flip to get on the gray platform. Read the sign on the wall (Right=2323/Left=2828). Keep going and use Thudley to hit the switch and release Carrie the platform pixl. She was trapped by Francis, the NERDY BUTTERFLY FANATIC, BASICALLY A TECH GEEK. Use Carrie to get over the spiked floor. Go all the way to the left and flip to get in the pipe. Go through the door you ended up behind. Go to the room with the floating doors. This time ground pound under the right door to knock it down and get through it. Use Carrie to get over the spikes. Talk to this robot and answer true to everything again, except this time input the code of 2323. Go in the elevator. Jump from the robots head to the upper platform. Grab the key and leave. Go back to the left door. Go to the long bridge and to the robot that asked you questions. Again answer true to everything and input the code of 2828. Go in the door and do what you did in the other room. Leave to the big kitty door and switch to Peach. Open it to start a brief dating sim. 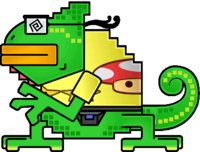 Switch to Bowser for power and use Carrie for speed. Watch for wavy patterns so that you can see where Francis will show up. That's your cue to attack him. If you need to see where he's going, go flip 3-D with Mario to see his shadow (though you can't attack him), or the hard way, don't flip and listen for the footsteps. He steps to the other side with two squeaking steps. Avoid the meowbombs he drops as well. This creep will eventually cry Uncle and run.

He appears again in 8-2 as an optional boss