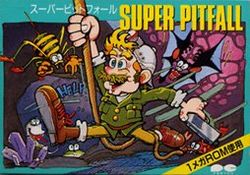 Super Pitfall is a 1986 action game for the NES, developed by Micronics for Pony, and released in the U.S. by Activision. It was the first game ever that Activision published for a system made by Nintendo and it was based upon Activision's earlier Pitfall! series for the Atari 2600. The game was later silently re-released without the "Rev-A" title by the publisher FCI. This game was also ported to the Tandy Color Computer 3. A sequel titled as Super Pitfall II was planned, but then was cancelled a short time later. It was going to be the localized version of Sunsoft's Famicom title, Atlantis no Nazo.

Super Pitfall is loosely based on Pitfall II: Lost Caverns, in that the object is to move Harry through the mazes to find the Raj diamond, and rescue his niece Rhonda and sidekick Quickclaw, both of whom have become lost in the caverns. In Super Pitfall, however, Harry must also return to his starting point after accomplishing these objectives. Like the original Pitfall, but unlike Pitfall II: Lost Caverns, Harry has a limited number of lives. This time, Harry is also equipped with a gun with which he can shoot the various deadly creatures that inhabit the caverns. He has limited ammunition and must find additional bullets that are scattered. Gathering gold bars results in extra points. Completion of this game requires the memorization (or mapping) of numerous hidden keys and warp zones and revealing each secret requires a precise jump, so the exploration portion of the game is very difficult.

Super Pitfall has frequently appeared on many "Worst games of the NES" lists. Many fans of NES games and the Pitfall series alike have been highly critical of this game for several reasons: