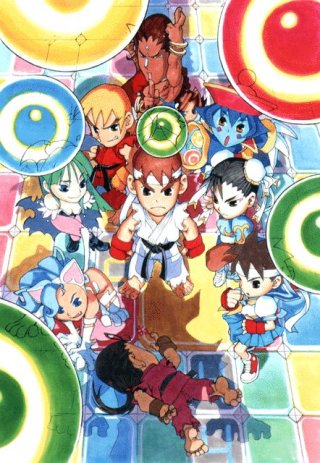 It's generally best to build a Power Gem the width of two or three normal Gems. This is perhaps the most efficient way because if the Power Gem is made any wider, not only is there no guarantee you'll receive the color Gem you need, but you also leave less space to place unwanted Gems. When engaged in a grueling match, it's best to build Power Gems containing less than nine normal Gems. This way, you're not at the mercy of the random Gem drops, and it leaves room to build other Power Gems.

It sounds easier than it actually is, but if possible, go for the Power Gem composed of 16 Gems. Take into consideration that there are many circumstances that will affect the number of Counter Gems a Power Gems of any size will allot. The biggest deciding factors are how cluttered your opponent's play field is, how late in the game the Power Gem was detonated, and most importantly, what the handicap settings are when choosing your character.

To really become effective, you must always make Power Gems. Below is an example using 12 normal Gems of the same color. The first diagram shows the 12 linked, and not in Power Gem formation. The second diagram illustrates the same Gems, only six have been stacked into a Power Gem, and are linked to three normal Gems on either side of it. Finally, the third example shows all 12 normal Gems stacked into one large Power Gem. It's easy to see how much more effective it is to build Power Gems. Not only will you receive a higher point count, but also a higher number of Counter Gems to attacks with (not to mention a large bonus at the end if you win.) Under ideal circumstances using this example, you'd receive six more Counter Gems by building a small Power Gem rather than just linking 12 Gems, and 18 more Counter Gems by building one huge Power Gem.

When you see a pair of normal Gems falling, and you only need one of them to continue building your Power Gem, you should separate them. This way you can continue to build vertically, rather than limiting yourself.

When your Power Gem is three Gems wide, it's best to place pairs of Gems that are the same color vertically in the center of your Power Gem. This leaves room for you to separate a pair of Gems containing the one Gem you need to continue building your Power Gem.

When a falling Gem that you need is attached to a Crash Gem of a different color, stack it vertically on your Power Gem, with the Crash Gem on top. Chances are you'll receive another pair of Gems with one color that you'll need, and the other color matching the Crash Gem that was strategically placed. Now just destroy the unwanted colored Gems, and continue building.

Rainbow Gems appear after every 25th drop. When in a pinch, you'd be relieved to see a Rainbow Gem, but when you're going for Power Gems or a Chain, the Rainbow Gem becomes a nuisance. If by chance you receive a Rainbow Gem at the same time as your opponent, and you have a large number of Gems in your play field, let them drop their gem first so you can use your Rainbow Gem as a counter with the hopes of destroying more Gems than they have sent. This should give you the upper hand.

Second
When you're in the process of building Chains or Power Gems, you should drop the Rainbow Gem on a Chain or Power Gem that contains the fewest number of Gems. This way, the penalty of being alloted fewer Counter Gems will work in your favor by saving the Chain or Power Gem that contains the Gems to inflict their maximum damage. As a rule of thumb, always leave one lane in your play field open for such a situation. You can then drop the unwanted Rainbow Gem in an empty lane for a Tech Bonus.
Third
When you find yourself in a pinch, erase the Gems that you do not need; like a Gem color that doesn't have any Power Gems, or Chains on screen. Alternatively, destroy whichever color occupies the most space in the forth lane from the left. This lane is the Drop Alley, and if it is filled to the top, the game is instantly over; even if there is plenty of free space in your play field.
Fourth
Another way to use Rainbow Gems is to quickly pile Gems up in anticipation of the 25th drop for the Rainbow Gem. Though this tactic is extremely risky, it can be extremely devastating if used. When executed, your chances of scoring Chains or Power Gems from the Gems you have randomly dropped is extremely high. If you're going to try this, attempt to stack the gems vertically in the two leftmost and rightmost lanes. (Note: a lot of expert players consider this a scrub method of playing since it takes little to no talent to succeed in sending large amounts of Counter Gems to your opponent if you're very lucky.)

Although it's much more advantageous to build Power Gems, it's a bit easier to build Chain Reactions. It would be inefficient to build only Power Gems during a match since the falling Gem are random. One way to build a Chain is to first place a Crash Gem then enclose it with Gems that are all of the same color, but a different color than the crash gem. This technique is called "Sandwiching". Basically you enclose the Crash Gem with one color, then place an alternative color on top in a way so you can achieve a chain reaction. See the example below.

If you want to start off with a Chain Reaction, it's best to use the "Staircase" technique since you need a flat surface to implement it. The idea is to place Crash Gems horizontally, and separate them if necessary. Take a look at the example below. Here you can see that the Red Crash Gem rests on a Yellow Power Gem. Next a Green normal Gem and Crash Gem are separated on the stairs of Red Gems. Once the Yellow Power Gem is detonated, the Reaction will start.

There are many ways to build Chains, and much of it depends on the situation. Here are some easy examples to follow:

Building Chains requires more technique than building Power Gems, and it can easily be counter attacked with Counter Gems, foiling the Chain you have constructed. Or, when the Counter Gems change into normal Gems, it can prematurely detonate the Crash Gem you were trying to enclose, thus ruining he chain. It's wise to quickly enclose a Crash Gem to avoid such a situation. While it's extremely effective to place Chains next to Power Gems for an added punch, it can backfire. Make sure that the Crash Gem you lay on top of regular gems will actually touch Gems of the same color when the Gems below it are destroyed.

What do you do when you see a Crash Gem falling and there's no need to destroy any Gems, or there are no Gems to be destroyed? The answer is save it for later use. Where to place them for later use comes with practice, and some examples are listed below.

When you see a Crash Gem and a regular Gem of the same color falling, you must be very cautious as to where you place it. If you just place them anywhere in your field, they will simple destroy each other. This is wasteful and may not help your situation. Instead, place them where you think necessary, or separate them, keeping the Crash Gem on a higher plane than the normal Gem. This will better your chances at scoring a Chain Reaction, or will help in building Power Gems.

If you attach a Crash Gem to Counter Gems of the same color, you can destroy them as a Chain, Link, or Power Gem when they turn into their normal Gem state. One point to remember when going for a Time Bomb is to quickly drop the following Gem pairs to shorten the count down on the Counter Gems for a quick detonation. While this is happening, pay attention to the pairs of Gems that you are dropping. If you receive Gems of the same color as those awaiting the countdown detonation, stack them onto the Counter Gems to make the Chain, Link, or Power Gem even bigger. To give you more time to accomplish this, it is generally best to place the Crash Gem that will start the whole detonation process on Counter Gems with the highest countdown number on them.

The technique is almost identical to the one explained above, however the ides here is to strategically place Crash Gems on your field that matches your opponent's Attack Pattern. This way, when you receive Counter Gems, they will land on one or more Crash Gems of the same color; assuring you an easy detonation once the countdown meter reaches zero.

When you receive Counter Gems, you have a choice between destroying them before they change into regular Gems, or waiting for the transformation. It's natural to have the urge to immediately destroy them, however it is sometimes better to leave them as they are. The following are examples of when you should wait, or delete the Counter Gems you have received.

Delete Counter Gems as quickly as possible when going for a Chain. If they are the same color as the Crash Gem that was placed as part of the Chain sequence, the Counter Gems can prematurely detonate that sequence of the chain when the Counter Gems turn back into normal Gems. If you find yourself in a losing situation, or if you think you will be in a worse position once the Counter Gems change, then destroy them immediately.

For example, look at Donovan's attack pattern, which is one of the hardest to counter. However, if you place a column of red Gems in the second column from the left, you'll create at least one red Power Gem, if not more. If you can get the column up to six gems in height, you'll make two Power Gems. Ryu, with his six straight column attack pattern, is the easiest fighter to counter.

If you find that you've made a mistake in placing your Gems, don't worry. Before the Gems have settled in place, quickly tap the Gem rotation buttons. If done properly, you can actually life the Gems, making it possible for a last minute placement.

If space is of the essence, and you must rotate your Gems to fit the situation, it possible to to make the Gems in play pass through Gems, Counter Gems, or Power Gems that have already been placed.