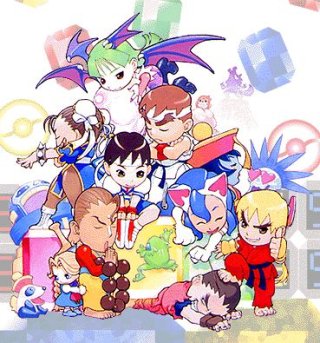 In order to gain an understanding of which way the Gem will rotate based on what button you press, refer to the following diagram. 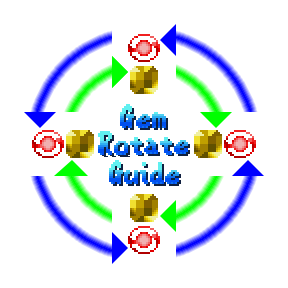 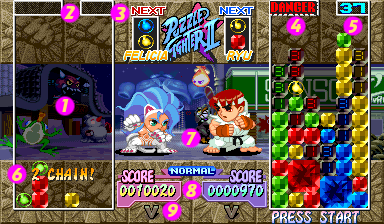 Counter Gems: When you destroy Gems, you are awarded with Counter Gems which are used to attack your opponent by falling into their play field. Counter Gems are unlike regular Gems because they have a number on them. The number on the Gem decreases by one for every normal set of falling Gems that are placed in the recipient's play field. Once the number reaches zero, they transform into normal colored Gems. The resulting gem color will be the same as the color that its number was displayed in.

If you find yourself the recipient of Counter Gems, keep in mind that they can be destroyed even before the counter reaches zero. If a Gem that touches a Counter Gem is destroyed, even if that Gem is a different color, the Counter Gem will be shattered. This will award you with fewer points than waiting to destroy it when it becomes a regular Gem, but you may find yourself without the luxury of patience, and in quick need of making room in your play field for more Gems.

When you stack Gems of the same color in rectangular arrangments, you create Power Gems. Power Gems are more powerful than normal Gems because they deal more damage (i.e. Counter Gems) when they are destroyed. They larger the Power Gem, the more destruction it will cause. The only limit to how big a Power Gem can be is the size of your play field, but it becomes increasingly difficult to add on to the size of a Power Gem as it gets larger.

When Gems of the same color are placed next to, or on top of one another, you can destroy them all with a single Crash Gem. These connected, or "Linked" Gems yield more Counter Gems than destroying single Gems. Use Linked Gems to set up Chain Reactions, or to join Power Gems together to deal even more damage.

When Gems and Crash Gems are strategically placed, it's possible to set off a Chain Reaction. There are many ways to create a Chain Reaction. One way is to destroy a gem that is sandwiched vertically between a Crash Gem, and a normal Gem of the same color. In the example below, dropping a red Crash Gem on the row of red Gems will cause the red Gems to be destroyed. In the process, the blue Crash Gem will fall onto the bottom blue Gems and destroy them, creating a chain. Chain Reactions are a common occurrence when using Rainbow Gems in a crowded play field.

When you opponent destroys Gems, you receive Counter Gems. The Counter Gems don't fall into your play field immediately; they are prevented from falling until you have dropped the current Gems you have in play into place. While the Counter Gems are held in reserve, the indicator on the left side of the play field alerts you with a word of caution. On the right side of the play field, you can see the approximate number of Counter Gems that are about to fall. There are three different types of warning signs depending on the number of Counter Gems you receive. The Caution sign turns on for 1-10 Counter Gems. The Warning sign is lit when 11-30 Counter Gems will be received. And prepare to think fast when the Danger sign is lit, as you are about to receive 31 Gems or more as soon as you drop your current Gem pair.

You can see each fighter's Drop Pattern on their designated pages. It is generally acknowledged by most expert Puzzle Fighters that after Dan (whose Drop Pattern is naturally the worst), it is actually Ken and Ryu who have the weakest Drop Patterns, in that they are the easiest to take advantage of and counter. After the hidden bosses, Akuma and Devilot, Donovan is considered to have a particularly difficult Drop Pattern to counter.