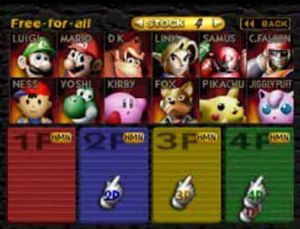 A fighter select screen with all characters unlocked.

There are twelve playable characters in Super Smash Bros. However, there are 8 starter characters and 4 unlockable characters in single-player mode through completion of certain challenges (Captain Falcon, Jigglypuff, Luigi, and Ness). All characters have certain advantages and disadvantages. Most of a character's strength is in how they are are used in combat, making stratification by ability difficult to establish. Therefore, because of the subjective nature, try out all the characters and pick your favorite.

Captain Falcon can dominate a game with his speed and power. Falcon's ability to combo his opponents up to a high percentage in a short amount of time makes him an excellent 1 vs 1 character. However, because of the chaotic nature of multi-player Smash, Falcon's ability to take control of a game is diminished, as isolating an opponent to combo them is difficult with multiple adversaries. In order to have a successful fight using Falcon, one must always keep in mind that he is a momentum character. Using his speed to move an opponent to a more isolated area, followed by relentlessly piling on damage with aerial attacks, is a great formula for success with Captain Falcon.

The large primate from the old arcade-style Mario games is back again. With a mixture of endurance and power, Donkey Kong has a lot of potential. The largest detriments are his size and lack of speed, which leave him vulnerable to attack. Relying heavily on his power, he dominates games by keeping things simple. With an attack style that focuses on well timed grabs and aerial attacks, DK is a character that can take charge in a hurry. If one is looking for a character with a great deal of creativity, then he may not be the best choice. However, if someone is looking for pure power, then he may be the right candidate for the job.

But it seems power currently isn't considered too good an advantage, as on the current tier list, DK suffered a fall of 3 places to the dreaded bottom tier, owing to his speed issues.

Fox McCloud is the protagonist in Nintendo's futuristic Star Fox games. He is the second-fastest character in the game, and definitely among the most agile. With an immobilizing projectile game, quick aerial execution, and the speed to chase an opponent across the map, Fox has the potential to be very deadly, and rules Hyrule Castle to the point of domination with his Blaster. However, Fox is a precision character so his full potential can only be unlocked with a deep understanding of his moves and timing, and, along with that, Hyrule Castle was recently banned from the ruleset, making him slightly less effective overall.

See the Unlockables page for information on unlocking Jigglypuff.

Jigglypuff joins Pikachu as one of two playable Pokémon in the game. She is light, has relatively short range, and if her shield is broken she flies straight up to her death. However, she is very mobile in the air, has 5 midair jumps instead of 1, has an amazing horizontal recovery and high-priority moves. This along with the game-breaking power of her Rest move makes Jigglypuff a force to be reckoned with.

Hailing from the old-school Kirby series of the original NES days, Kirby carries into the game a variety of abilities he has in the other games in his series, including the ability to suck other characters inside himself and take their abilities. While some of his moves are regarded as cheap by many players, when mastered, his drill kicks and tilt combos can be lethal, putting him as a solid top tier character who can win quite a few tournaments.

Although hindered by a less-than-ideal

recovery, Link can be devastating in the right hands. His amazing projectile game can be used to offset his lack of speed and he has many powerful defensive options as well as the ability to combo spectacularly. It takes time to learn to play Link correctly, but he can become one of the most fun characters to play. However, his terrible recovery, slow attacks, and being easily comboed due to being a heavyweight and falling fast (though it DOES make him resistant to the upper blast line), he is often considered the worst character to use for Dream Land. However, he is far better on Hyrule Castle due to his projectiles, but the banning of this stage has reduced Link to the second-worst character in the game.

Ah, poor Luigi. First he was just a palette swap of Mario, next he was forced to live in Mario's shadow, andnow, he's considered the worst character in the game. Poor guy just can't catch a break.

His controls are similar to Mario but he is less powerful. However, his

has a very powerful "sweet spot" located just in front of his hands. Instead of 1% damage, Luigi's

will do 25% damage and light the enemy on fire. This will defeat enemies when they reach about 55% damage. But ultimately, his humililating dead-last position on the recent tier list comes from a combination of akward physics, poor range in his moves, and a lackluster combo game, and worst of all, having very weak, if any, offensive options in neutrual due to his previous stated flaws.

When one thinks "Nintendo", this guy comes to mind. Mario and his games fill many of the spots for top-selling games of all time. In Super Smash Bros., Mario has fantastic aerial recovery time, a great upward air attack juggle, and very annoying fireballs, but isn't quick enough to keep up with the likes of Fox or Captain Falcon. However, he HAS lost quite a few mains...

Ness is a young psychic boy (age 13), protagonist from Nintendo's Earthbound RPG series. Ness is a hidden character, so you will have to unlock him to use him in versus play. He is probably one of the more difficult characters to play with, since his third jump is very tricky to pull off for a new player, and his floaty, circular second jump can weird out even veteran players. He is a fairly light, slow character with powerful attacks, and is the only character with a healing move.

An electric Pokémon from the game series of the same name, Pikachu is very weak, but agile. He is so agile, in fact, that he has been considered "cheap" by the unenlightened. In the proper hands, there are few disadvantages to the little guy. He has one of the best recoveries, if not the best, in the game, and has a simply unavoidable edge-guard. He suffers from short range on the ground, is relatively light, and takes a good level of skill to play well, but he is still a pretty potent character, and has always been considered the best in the game, according to the tier lists from the SmashBoards N64 community.

Samus is a master of distance, but an all around good character to play. Various moves need to be mastered to be an effective Samus player. However, she suffers from high ending lag on many of her moves.

Yoshi comes from the popular Mario series, and brings into the game some of his abilities from the series such as his ability to suck people up with his long tongue. He was once considered one of the worst players in the game due to his lack of a third recovery technique (which he attempts to make up for with an extra-high second jump) and his general slowness. He does have powerful melee attacks, though their slowness makes them easily avoidable.

However, Yoshi gained a lot of mains recently, who all showed his incredibly powerful combo game with his down aerial and grab, his fast dash, and his Egg Lay immobilizing foes for free damage-racking to gain top spots at many tournaments, improving the cute guy's rep and shooting him up to a great 5th place on the current tier list.