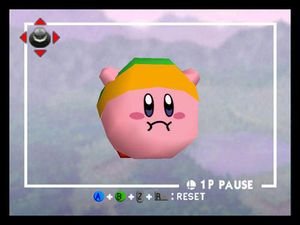 Kirby after swallowing Link in the Hyrule Castle arena.

Kirby has a variety of strengths that make him both one of the easiest players in the game for beginners to use as well as a very effective player for veterans. Kirby can use his upward tilt to juggle quite effectively. Depending on the weight of the character, he can normally juggle about three to five times (more for heavier characters). This can be followed up with a down drill kick for a very effective combo.

Kirby has five puff-jumps that make him arguably the easiest player in the game to return to the map with, especially for beginners. His five puffs allow him the greatest flexibility in his return path of any character (except perhaps Pikachu, whose return in unpredictable). By pushing

quickly, Kirby can drop down to avoid an attack but still recover with his remaining puffs. When Kirby is knocked a long ways off the map, using his puffs with a second or two in-between the puffs allows for a greater distance to be covered. Also, when knocked far off the stage, Kirby can use his fair drill kick to increase the horizontal distance he can cover between puffs.