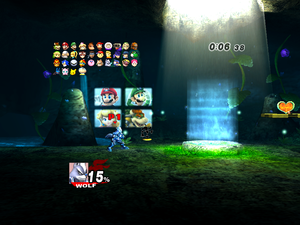 The all-star rest area in Brawl.

In All-Star Mode, you fight a series of battles against every playable character, one series at a time. You can play this mode by yourself, or with a friend. Between each match, you'll be taken to the Rest Station, where you can see who you'll be fighting next. At the Rest Station, you are given three Heart Containers (or six if you are playng with two players; which is in a mode called Co-Op Mode). There are six Heart Containers in Co-Op and the extra 3 Heart Containers are underneath the platforms which the normal three hold. Each restores your damage completely. But each can only be used once, so use them sparingly (as the Heart Containers do not respawn when all of them are consumed). If you don't use them, the amount of damage you've built up carries over from one match to the next, and you only get one stock. Also, sometimes you will be awarded trophies for doing specific things. Just rush over and click attack to get it.

The characters you'll be fighting are grouped by series, and arranged according to the age of the series.

Up to two enemy characters can appear on the stage at a time. For series that have more characters, the rest appear one by one after you KO someone else.