Assist Trophies are listed here and like Poké Balls will release something to help you. Only one Assist Trophy and the character it releases can be on the stage at any time.

Note that Kirby's final smash will also cook the assistants that come out of Assist Trophies. 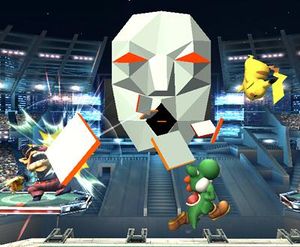 The primitive polygonic version of Andross from the original Star Fox will move behind the battle, where he shoots peculiar polygon panels, doing 12% damage to anyone they touch. The way the panels fly from back to front makes it a bit difficult to know where they will hit, and the panels can sometimes fill up the stage, making it hard to find a safe spot. 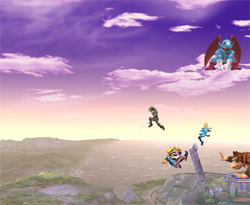 From the game Devil World on the NES (never released in USA) comes the fearsome Devil. Once he points to one direction, even the camera has to obey his wishes, scrolling the entire screen and KO boundaries to that direction. The scrolling doesn't actually benefit anyone, as even the user is affected by it. The scrolling can make it quite awkward to fight, since it can leave entire portions of a stage offscreen. 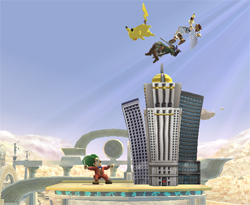 Dr. Wright from the SNES version of SimCity used to be a mere assistant of the city mayor, giving the mayor helpful advice and gifts. Here, he makes some city-planning of his own, sprouting three skyscrapers out of the ground like plants. There is a one in ten chance of him sprouting super scrapers that cover a bigger area and do more damage and knockback. 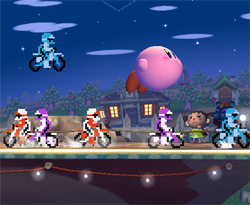 The pixelated motocross racers from Excitebike race across the stage, damaging your opponents. They can cover the entire platform they are summoned on, making it a no-man's land for your opponents. The bikers don't seem to be very smart though, as they will ride their bikes straight off an edge and into their doom. 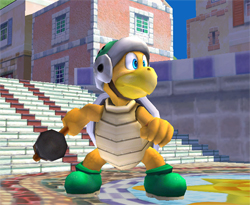 The Hammer Bro, who was originally from Super Mario Bros., will chuck hammers at opposing players. The hammers fly in an arc, and it can be difficult to evade them. The Hammer Bro also tends to jump around, making the trajectory of their hammers even more confusing. 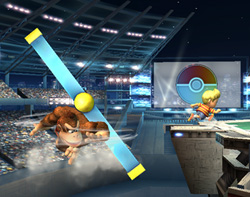 The Kururin-piloted helicopter that conquered the obstacle courses from Kuru Kuru Kururin is here to assist. It becomes a solid part of the stage that rotates slowly when summoned. Players can use it as a moving platform, but they can also get pushed off the stage when the Helirin becomes vertical or get their recoveries denied as the Helirin is horizontal. 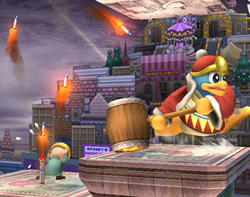 The boy genius and inventor from Earthbound joins the fight with his Multi-Bottle Rocket 5, launching 4 bottle rockets and one mega bottle rocket, all of which home in at the closest opponent. He will repeatedly launch more rockets depending on the user's position in the match. If the user is currently winning, he will launch less volleys of rockets. If the user is falling behind, he will launch more volleys of rockets. 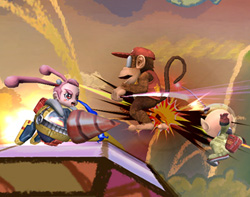 Jill from Drill Dozer uses her eponymous Drill Dozer in battle, shredding through your opponents and dragging them along with her, sometimes right off the stage. She can be simply avoided by jumping away from the level of the stage she is on, but she will occasionally jump to the next level. 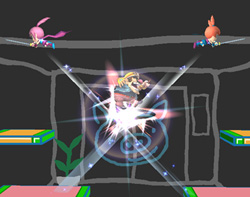 The Katana twins from WarioWare, Inc.: Mega Microgame$! perfrom a special dance combination, flying offscreen and shooting straight at opposing players slicing them apart. Each of them do 10% damage, and getting hit by both will do 20% damage. 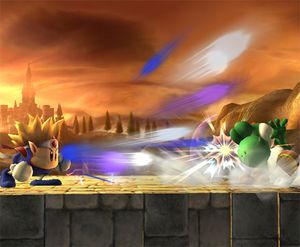 Straight out of the Kirby universe, Knuckle Joe comes with deadly fighting techniques. He will perform a devastating Vulcan Jab that locks his opponents in before ending with either a Smash Punch which shoots straight through the enemies or a Rising Break which is a super powerful uppercut that throws opponents upwards. 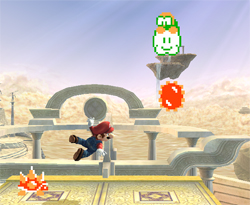 The pixelated Lakitu from Super Mario Bros. comes over its cloud tossing Spinies one at a time. The Spinies he tosses are slow and move predictably, but they are invincible and will do a lot of damage to opponents that touch it, even meteor smashing them in midair. However, Lakitu himself isn't invulnerable, and can be taken out by a few attacks, if anyone manages to reach him. If he is defeated, he will no longer toss Spinies, though existing Spinies on the stage will remain until they fall off the stage or the trophy's duration ends. 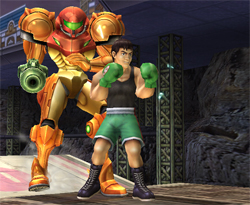 Little Mac from Punch Out!! makes his appearance in Brawl. Don't underestimate him due to his size, as his attacks will do high damage and knockback, resulting in a knockout at higher percentages, even breaking an opponents shield with a full combo. He will move around the stage, attacking opponents with a 2 jab combo finishing with a strong uppercut. 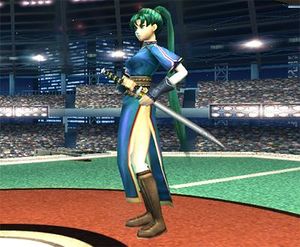 Lyndis from Fire Emblem appears before her enemies. She prepares herself, and after a suspenseful moment, strikes at one of the summoner's opponents, usually the closest. The attack is very powerful, killing at low percentages and difficult to dodge. It can make your opponents very scared for the short moment before she strikes, sometimes even making them stop fighting to prepare for the strike. 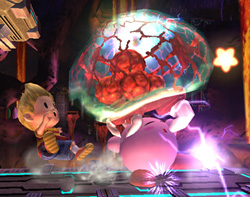 The creature which inspired the title of the Metroid series will hunt for its prey. When it finds an opposing character, it will latch on to their head, draining their life and making them flinch repeatedly. Although the attack can be very annoying to deal with, you can take advantage of it if you're caught by one. As it interrupts causes you to constantly flinch, you can use your recovery moves repeatedly, or cancel the ending lag of your attacks. 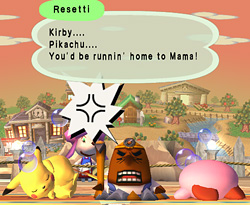 Mr. Resetti from Animal Crossing burrows up from underground and lectures the players. He will impersonate anyone and make fun of them, but mostly the player who is losing. Not the most useful Assist Trophy, but probably one of the most hilarious. He does respond if you hit him, and may eventually release an explosion if messed with enough. 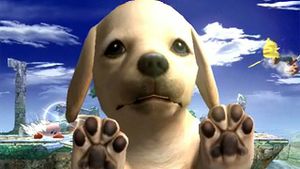 First appearing in the E3 2006 video (long before Assist Trophies were actually revealed), a Labrador puppy from Nintendogs jumps up and blocks the screen. It can be very annoying to all players, including the summoner. The puppy is pretty distracting, and most players will either put down their controller or flail around wildly. If you do remember the location you and some other players were in, you can sneak in some smash attacks to get a KO. 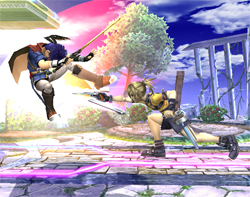 Saki Amaniya comes from Sin and Punishment: Successor of the Earth. Wielding his powerful Cannon Sword, his ready to slice and shoot against your enemies. His choice of attack depends on where your opponents are. If they're far away, he will try to shoot them. If they are in close range, he will slash at them with his sword. 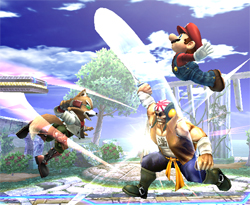 Samurai Goroh, who hails from F-Zero, will chase after his opponents, attacking them with a flurry of slashes from his katana. Although not being the most complex character to be summoned from an Assist Trophy, his attacks are effective enough at racking up damage on players. 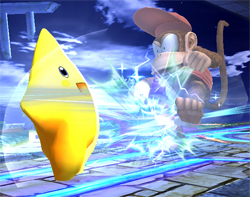 Starfy comes from the game series Densetsu No Stafy, otherwise known as the The Legendary Starfy. He shines bright and does a spin attack that can trap enemies, though it is pretty weak. Opponents can attack him and knock him away, though if he takes too much damage he will actually explode, doing high damage and knockback. 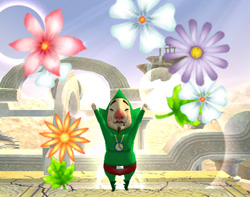 Originally appearing in The Legend of Zelda: Majora's Mask, Tingle arrives with a bunch of magical enchantments. He can cause wierd effects to every one on the stage. These include: 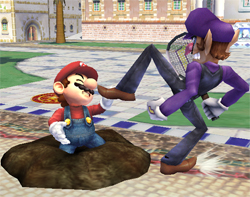 Waluigi, who first appears in Mario Tennis, is not someone who plays fairly. He will chase down any foe and stomp them to bury them in the ground, then he keeps stomping to finish with a powerful kick that can spike or a deadly hit with his racket. 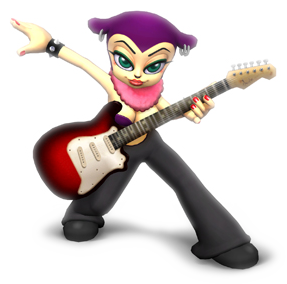 Barabara the Bat from Daigasso! Band Brothers is here to shred some notes! When she plays her guitar, the sheer power of her music manifests itself as damaging soundwaves that do moderate knockback, with the finishing wave being the strongest. 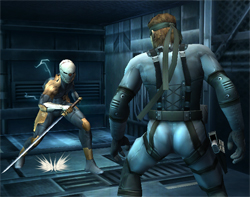 Frank Jaeger, the Gray Fox, comes from the Metal Gear series to slice your opponents to pieces. He can reflect projectiles with his blade and also teleport from anywhere on the stage to the top, even when he falls off the bottom blast line.

The little foot soldiers and tanks from the Advance Wars series will march on the stage as an air raid siren sounds. They will fire tons of bullets and missiles at your opponents while chasing them down. The missiles that Tanks shoot will do more damage than a soldier's bullet.

Isaac from the Golden Sun series appears. He is quite adept at using Psynergy, and will use the "Move" spell to push opponents off the stage with three consecutive giant hands. While the hands themselves are difficult to dodge, they do no damage and knockback.

The third Shining Fighter model of the Ray line of toy robots from Custom Robo can be summoned to help. It flies around the stage, shooting opponents with his energy blasters and occasionally launching an explosive bomb.

Sonic's arch rival from Shadow the Hedgehog brings his deadly ability to warp time to the battlefield. He uses the Chaos Control to slow the speed of every opponent on the stage except for the summoner. During this slowed down period you can pull off some impressive combos, as your opponents will be stuck in hitstun way longer.