This article needs images! If you have any images of the things detailed in this page(To see what Tabuu looks like), please add them to this page.

This article needs images! If you have any images of the things detailed in this page(To see what Tabuu looks like), please add them to this page.

Here are a list of bosses seen in Classic Mode and adventure mode. Note some foes like Mario, Pit, Link, Yoshi and other characters will be fought against as well like Lucario, Snake and Meta Knight fought against false Peach and false Zelda. Also if you want a boss trophy you must weaken the foe bad enough and then throw a Trophy Stand at it. 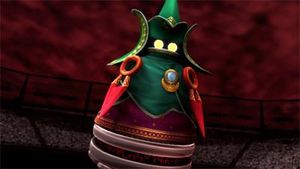 A mysterious being who aids the enemy forces that you fight against. Not fought as a foe, but destroyed many R.O.B.s with various bombs. He eventually becomes R.O.B., your ally, when Ganondorf destroys the subspace bomb factory using every bomb in stock (~100). 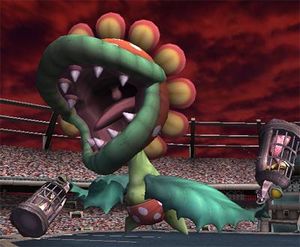 Petey shows up within The Subspace Emissary. He carries two cages, one in each hand that contain Princess Zelda (on the left) and Princess Peach (on the right). You only get to save one, so pick the cage that holds the girl you want to play as later and then smash it to pieces.

Petey can seem invincible during the fight, so focusing on the cages is recommended (he can be hit, but he doesn't have a health bar like the cages do; however, hitting him will take a severely reduced amount of damage from both cages). As with all enemies and boss fights, smash attacks deal a significant amount of damage in comparison to normal chains and special attacks.

The giant humanoid plant has only two real attacks: swinging one cages in a sweeping motion, or launching himself similar to Bowser's ground pound attack. When he swings one of the cages, just jump over them or move to one side. When he launches himself, run as fast as you can away from the direction he's moving (move in the opposite direction that he is). If you and him are on an edge, just run to the center of the stage. Note also that there are white lines on the floor of the stage--these are each "safe" zones if he's falling on the other side. His falling motion will deal a hard punch, and will probably KO you if you're over 100%. Alternatively, you can also avoid the fall by performing a sidestep dodge just as Petey falls to the ground. This way you will be able to attack right away when he lands.

If you save Peach you will fight Mario and Pit later on, but if you save Zelda expect to fight Link and Yoshi later on.

It does not matter which Princess you save because both of them will be captured later on. However, if all Subspace Emissary cut-scenes are to be obtained, you will need to go through the Subspace Emissary twice and save the opposite princess.

If battling him in boss battle mode, focus all your attacks on one cage. If fighting with a character with a long range ability, stay at the opposite side of the arena and shoot at him (StarFox characters are best recommended for this strategy. 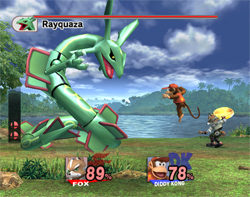 Before beginning the fight, you are prompted to select a character. Start out with Fox, as his faster attacks can pile on more damage to Rayquaza. Also, you can use Fox's reflector to bounce Rayquaza's energy ball attack back. One thing to keep in mind, no matter who you are playing as, is that the Ray Gun or Peanut Popgun will prove to be quite ineffective against Rayquaza. When he leaves the screen, be ready to dodge one of his attacks. All in all, Rayquaza is harder than Petey Pihrana, but definitely easier than some of the game's later bosses.

The leader of the space pirates in the Metroid series, Ridley is a large, flying, dragon-like creature that can breath fire, yet he doesn't breath fire until you fight his other form Meta-Ridley. He can blow you back by flapping his wings, scrape the ground by his tail, and use few of Master/Crazy Hand's and Rayquaza's moves.

Compared to his Meta form, he's easy enough to defeat. Only on the harder levels is he more dangerous, since his power is increased and can rack up huge amounts of damage. The one move you should look out for is his aerial ram attack. He first moves away from the stage, then rams head-on across the stage. This can KO you in an instant, literally, so double-jump, then float downward. If you're lucky, he'll whisk above you; if not, DODGE!

A kid from Mother 2 (EarthBound) and Mother 3 in a mechanical monster terror spider that has a variety of attacks like; attacking with its 8 legs multiple times in a row, creating a huge energy ball shooting powerful energy beams, summoning exploding robots, and floating in the air while use the energy beam.

Even though he may seem tough, he's actually easy. If you use a small character, you can jump on top of him to perform major amounts of damage on him in a short amount of time.

You should dodge both types of energy beams, as that those cause the most damage, and on the harder levels, could most likely KO you. If he attacks with an energy ball to create beams, move to the opposite side he's on and double-jump up. If he attacks from above, move!

A boss that transforms a lot from its vehicle-like mode to ram into foes, shoot missiles, and a super-powerful stomping robot.

When fighting Galleom the first time, use Ike or Marth to counter all of Galleom's attacks. Marth is recommended, because Ike's counter takes a longer time to start up. When you fight Galleom the second time, use Lucas's PK Thunder and PK Freeze, which surprisingly does a lot of damage.

Same as before only made of metal, shoots a lot fireballs, and will attack the Falcon Flyer with several attacks.

You have a 2-minute time limit when playing on Subspace Emissary, and if you don't kill him within that limit, you lose. Don't worry about the time limit on Boss Battles; there isn't any on there.

It flies off the screen a lot, so you need to be on your toes. Also, the closer he is to dying, the farther away he'll be from the Falcon Flyer. For comparison, his starting position is just over the Falcon Flyer, while near-death is when you can only see his head and part of the neck.

One move you should look out for is when he grabs onto the Falcon Flyer's engine, in which the Flyer goes slowly downwards to the bottom of the screen, eventually KOing you if you don't do anything. Instead of making a break for it and triple-jumping (regular Jump twice and Up+Special Button) up to the point where he lets go it (it hardly works with most characters; exceptions are ones that have multiple jumps, like Kirby), hit him right when he's on the engine to knock him off it. Do this fast, or you will be KOd.

The second of the two Subspace Army mechs. After the Mr. Game & Watch clones are tossed out of the control room of the Battleship Halberd, they are converted into Shadow Bugs. These Shadow Bugs combine to form Duon, fought as Fox, Peach, Zelda, Lucario, Snake, and Falco. When it is defeated, the Shadow Bugs scatter, leaving behind the real Mr. Game & Watch, who joins the effort to defeat the Subspace Army. Expect this boss to be a hard one.

It fires homing missiles that are very large and deal a lot of damage on impact. Fortunately, the missiles also harm Duon so if you can get the missiles to hit him, it will lower his percentage significantly by a certain amount, regardless of difficulty.

Tabuu is the main villain of the game. He has a blue-fluorescent color and a real human shape.

In Subspace Emissary, he turned every character into a trophy. Kirby, Luigi, and Ness, thankfully, were restored by badges from King Dedede. Tabuu was about to do it again when you confront him a second time, but Sonic stopped him from doing it.

You will enter the Great Maze and fight a dark clone of each character that turned into a trophy. Expect a challenge.

Tabuu is a powerful foe because he is the last boss but luckily you will be able to fight as almost everyone and have six characters to select.

The one attack you should be most aware of is when he spreads his wings and creates 3 waves. It is a one-hit kill and is very hard to dodge (it's actually possible to survive this attack, but it sends you flying so far that it's virtually impossible if you aren't using a very heavy character, such as Bowser or Charizard)! Either stand as far away from Tabuu as possible when he performs the move or perform 3 well-executed dodges just as the wave reaches your character. It's best not to stand anywhere near him or you will be KO'd with that attack. Most of his attacks are very powerful, and the best way to avoid them is to use particularly strong characters, such as Bowser, King Dedede, Samus, and Donkey Kong.

In Boss Battles, after defeating nine of the ten bosses, you'll face off against him. It doesn't matter which order; he'll always be the last boss. To even the field, his attacks are slightly weaker and his health bar will go down faster than it did in Subspace Emissary, but the 3-wave attack is still very powerful. If you can defeat him before that attack, that's great, but it'll be very hard to do.

When on intense difficulty, every one of his moves is a potential one-hit kill. All of his attacks are in some way dodgeable.

Although not actually a boss in the Subspace Emissary, he is fought during Boss Battles and in the Classic modes, with Classic as an ending boss.

He's considered the 'right hand' while the Crazy Hand is the 'left hand'. In Classic, when you complete Hard or higher difficulty within 9 minutes, you'll face off against both Crazy Hand and Master Hand, in which they 'pair up' to do special attacks.

Exactly the same as in Melee, just with random health, like from 150HP to 330HP, depending on the difficulty you have it on. You don't increase the % he has; you decrease the amount of HP (Hit Points) he has, be it on Classic or Boss Battles. Depleting all of his HP will finish him.

Although not a boss in the Subspace Emissary, he is fought during the Boss Battles and during Classic after getting to the Master Hand in less than 9 minutes on Hard difficulty or higher. Considered the 'left hand' while the Master Hand is the 'right hand'. They 'pair up' together to do team attacks on you in Classic.

Same as before on Melee, only with random health from 150HP to 330HP. You don't increase his %; you decrease his HP (Hit Points), be it on Classic or Boss Battles. Deplete his HP and you'll be able to finish him.

Crazy Hand shares a lot of attacks with Master Hand except with an elemental effect added to them, so they won't be stated here. Crazy Hand himself does have some moves unique to him, as well as a few when combined with Master Hand.