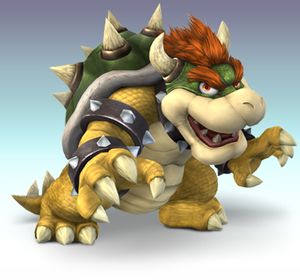 Bowser, the king of Koopas

Mario's long-known rival, the king of Koopas, is ready to make his grand entrance into PM as a bigger and better version of his Melee and Brawl selves combined.

Bowser in Project M is who you expect him to be; he is the heaviest character in the game who exchanges large amounts of speed for tremendous power.

With all of the buffs Bowser has received, he has become a much more dangerous foe to compete against than in Melee and Brawl. His side special, Koopa Klaw, when aimed downwards, is a good tool for tech-chasing when using the grounded version, as when performed, Bowser throws his opponent to the ground and meteor smashes them, rendering them vulnerable to follow-ups that you can take the opportunity to perform should they fail to tech. On the other hand, the aerial version of the move is able to spike opponents, making it one of Bowser's best edgeguarders in the game.