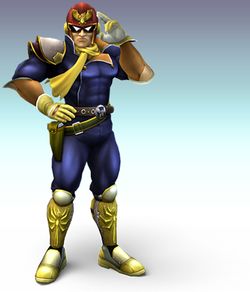 The most famous F-Zero pilot that fans know and love makes a comeback in Project M, once again as the tough and speedy challenger he was in Melee, while still having received several buffs.

After his Brawl iteration was heavily criticized due to a loss of some of the amazing speed and power he had from Melee, in addition to the general physics of the former itself, Falcon was reverted back to his unanimously better iteration from Melee, with a minority of his buffs from Brawl maintained, and the reintroduction of the Melee physics only make it better for him.

Falcon is arguably one of the most versatile fighters in the game; as mentioned, he utilizes a combination of impressive speed and power. 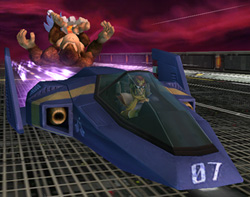 Blue Falcon: summons his Blue Falcon in front of him to hit any number of opponents. then teleports his victim to an unknown track and rams them with his car, the Blue Falcon. The attack causes very high knockback, often a one-hit KO if the opponent has a medium damage level. However, this only works if he hits someone when summoning his car. He is the only character with a cinematic final smash. Strangely, it will delete all items on screen.