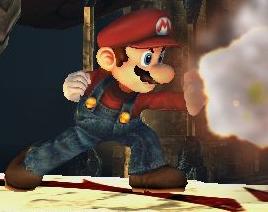 In Classic Mode, you select your character, number of lives, and difficulty level, and battle your way through a series of 12 battles. Your opponents, allies, and the stage will be randomly chosen; however, each match is based on a different game series, so the characters and stage will be chosen from that series.

Note that if the Pokémon Trainer, Zelda/Sheik, or Samus/Zero Suit Samus are who you'll fight against, the single character/transformation will be said by the announcer (i.e., instead of "Pokémon Trainer", it'll be either "Squirtle", "Ivysaur", or "Charizard").

Any one of these matches may have special conditions applied; these are also randomly chosen. In addition to the normal 1-on-1 matches, there will be:

For the first 10 stages, no two battles are going to appear consecutively.

Level 11 is a free-for-all with three random opponents on Final Destination.

Finally, Level 12 pits you against Master Hand on Final Destination. If you're playing on Hard mode or higher, and if you reach this level in 9 minutes or less without any continues, Crazy Hand shows up too. Be warned that you fight both of the hands at the same time.