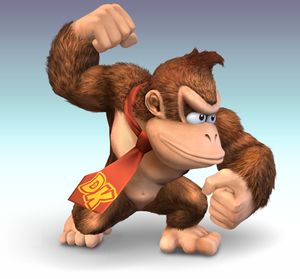 Donkey Kong returns as a veteran from previous installments of the Smash Brothers series. He still bears the same moves and attacks from Melee.

Donkey Kong is one of the heaviest characters in the game. He naturally has a big size, powerful attacks, long range, and great strength, being able to move and jump freely while carrying a heavy item like a crate. However, he doesn't have a projectile. His large size means he will get hit by a lot of things. However, he is known for being one of the fastest heavyweights, with speed to match a middleweight.

DK's ground game dosen't particularly shine. His jab is good for getting your opponents off of you quickly. Your tilts have a lot of range, and your up tilt is useful for juggling opponents. Your dash attack is laggy and dangerous on shield, so avoid using it. Your smash attacks are quite powerful, especially your down smash, which, when hit by the hands, sends opponents flying away.

Donkey Kong has a grab with quite good range. His forward throw makes him carry opponents on his back, and he is free to throw them anywhere he wants while being able to move freely. His up throw and back throw aren't bad KO moves, and his down throw is a chaingrab on some characters.

His air game is great. His neutral air has little startup and covers around him. His forward air is a powerful meteor smash if it's sweetspotted, but it can still knock opponents far from the stage when sourspotted. His down air is another meteor smash and is more reliable. His up air is a great KO move that is fast and powerful. His back air is one of the most useful air attacks in the game. It's fast, has good range, and doesn't leave you open for attack. Approach and defend yourself with this. In fact, try to face the opposite of your opponent just to hit them with back air. It's just a very useful and important part of a good Donkey Kong playstyle.

As for his specials, he has useful ones. His Giant Punch is easily a KO move, with the feared 9-wind punch that is absolutely deadly on high percentages. His Spinning Kong negates all momentum effectively, making him survive normally lethal attacks. His Headbutt plants the opponent into the ground like a Pitfall. His Hand Slap is extremely easy to combo into and is great to tack on some damage. 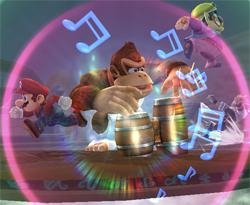 Konga Beat: Whips out his bongos and plays with a fury that bursts your eardrums. You can play along by pressing button combos. Following the rhythm successfully will result in more powerful, larger blasts, while playing out of sync will result in small, weak blasts. The timing is a bit tricky, so practice!