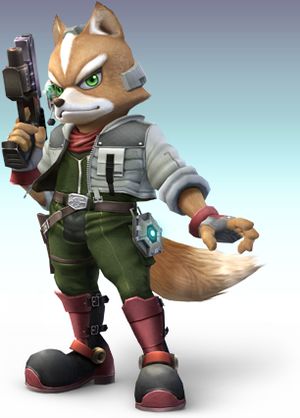 Fox falls into the category of light and speedy fighters. He's best recognized for his unimaginably fast falling acceleration, which works both for and against him, and his quick Reflector.

Note: priority refers to the usefulness of the attack in a normal fight, and how much you should employ it during battle.

Fox's ledge attack is comparatively fast under 100%, and has very impressive range for him.

As you may have guessed already, Fox's aerial game is significant because he can fall so fast,. In some cases he can jump, land, then jump and land again in the same time it would take another character to jump the same height once. This makes it easy to mini-hop into most of his aerials attacks without much danger. Many of his aerial attacks are also surprisingly strong compared to some of his other moves.

Fox's grab is close-ranged. His grab-hits only deal 1% each, but they're mildly fast. But his throws are... just pathetic. They lack much damage, don't even think about KOing with one, and you can't chain any of them.

Landmaster: It's the tank of Team Star Fox. Ride it to blow your enemies away. Hold jump to hover, tilt down to roll, tap left or right to spin, and press attack to fire the cannon. Rolling and spinning does damage to nearby enemies, but the cannon is easily the Tank's strongest attack. The cannon notably strikes anyone riding on the shaft, not just what's in front.

If a slow character is standing atop the Tank, the driver can hover to the top of the stage to instantly KO his passenger. Faster characters, like Fox himself, will usually be able to dash off the tank in time to save themselves. This is notably a better tactic with Falco's or Wolf's tanks, since they can ascend faster. However, Falco's deals less damage with conventional attacks, while Wolf's disappears sooner.

If you yourself are faced with Fox's Landmaster, dive for a ledge and hog it, refreshing your grab on it as often as possible to preserve your invincibility frames. If you're a floaty character like Jigglypuff or Kirby, hide underneath the stage as much as possible. If you're on an edgeless stage, you're pretty much boned, especially if you have little horizontal speed.

In Giant Brawl, the Landmaster becomes giant. If Fox is just giant by the effect of a Mushroom or WarioWare, the Landmaster will be normal-sized. A special thing about this Final Smash is that it can also take enemies offscreeen, unfortunately, the same thing goes for allies.

This works best if the target drops below the ledge before Thundering--which is common practice. Thunder-Reflecting when they're level or higher than the stage is a much harder task, but from these angles they won't be able to grab the edge as easily. If they miss the edge, you can jump, roll, or shield as they recover, then hit them with a Dair or another attack during their after-lag.

Falco is much like Fox. However, his Blaster has a small amount of knockback and a greater range, unlike Fox's. His reflector will cause certain problems to the Fox user that spams his Blaster. The key to defeating Falco is to take advantage of Fox's greater speed and Reflector to send Falco's Blaster shots right back at him.

Wolf has extremely inaccurate recovery, a lower rate of fire and range on his blaster than Fox's, and a different side special attack. Priority one when fighting Wolf is to keep him at a manageable distance as his down smash can be devastating when Fox is at a high percentage due to its relatively high knockback. Don't be overzealous about using the Blaster as Wolf's Reflector is stronger than Fox's when it comes to reflecting projectiles. Above all, deal damage continuously and use the up smash when Wolf has reached at least 130%. Be cautious as a skilled Wolf can use his Reflector as a pseudo-Counter.