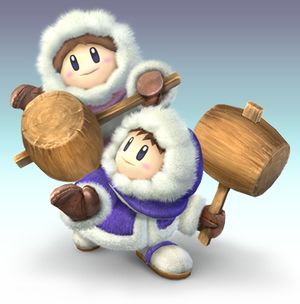 Ice Climbers is a very difficult character to master. Their metagame revolves entirely around their advanced techniques. They have the best grab games of all, since having two of them means they can throw an opponent to the other climber, which can grab again. The Ice Climbers also has the unique ability to desync, as in controlling two Climbers separately to confuse opponents and to increase ICs options.

However, the Ice Climbers have a small grab range, so landing a grab in the first place is hard. Chaingrabbing and desyncing also requires strict timing and lots of practice. A single climber is also very weak, and lacks a horizontal and vertical recovery. Also, they're easily separated and their chaingrabs are useless in anything that's not one-on-ones.

Overall, Ice Climbers are a character who requires dedication and determination. But once mastered, they can become a dangerous character to spar against. 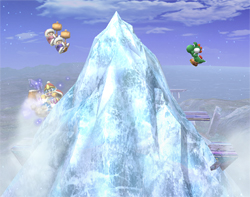 Iceberg: The Ice Climbers send a gigantic iceberg up from the ground that covers almost all of the stage, leaving small platforms to stand on. These platforms will be slippery, and the iceberg can hurt your opponents or even freeze them.