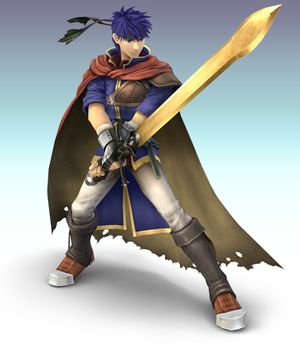 Ike's strategies revolve around Eruption and his Aether, as well as some grabbing. Normally Ike is a hit-and-runner, due to his slow speed. But when the opponent's damage is high, then that's where being as Ike is fun. As the point of brawl is to KO people, you have to attack people. Naturally people will come near you, and that's where you can use your Eruption to your side. This attack grows when charged, and will also rise people up. When they are up in the air, you can wait for them, and grab them. You can repeat by throwing them up, and attacking with your Aether attack, to rack up a good 25% damage. Another thing to do after you use Eruption is to use a Quick Draw attack, or when you feel like enough, to hit them with a smash attack to gain a point. With the possibilities of three follow-ups, this will leave your opponent thinking, and that's the time to make them lose a stock.

Many of Ike's strategies revolve around Quick Draw. Try to stay away from your opponents but close enough that you can unleash Quick Draw at any time. When your opponent's damage is in KO range, the fun begins; instead of attacking with quick draw, every now and then cancel the attack and use a smash attack. Because a cancelled Quick Draw has very little recovery time, you can throw in any type of attack, and this confuses your opponents as to whether you're going to use Quick draw or cancel it. But that's not all! if you're charging Quick Draw, your opponent may try to attack, so cancel it and use a counter instead! For a character with medium-slow attacks, you usually have the advantage in almost all your situations, and this makes you rule the field in a 1-on-1 match (during a free for all it's not quite so simple, but it still works).

Because of this strategy, Ike can out-do almost all his opponents if they're heavier than him, and it works against many medium characters too. On smaller, faster characters however, it's not quite the same. 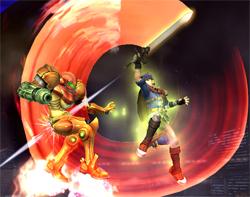 Great Aether: Ike throws the enemy to the skies with a slash and says "Great aether!!" then starts hitting and slicing the enemy savagely (similar to Link's final smash but can trap up to three opponents) and finishes with an eruption attack in the air.