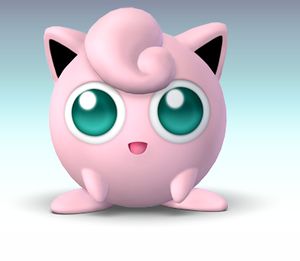 Jigglypuff needs to be unlocked

Jigglypuff's main strength doesn't lie within its weight, speed or strength as Jigglypuff struggles with those. Rather, it lies within it's jumping abilities. The basic idea with Jigglypuff is to throw opponents into the air or off the stage and then constantly knock them back with pound or an aerial attack. Thanks to Jigglypuff's ability to jump multiple times in mid-air, she is capable of jumping off the stage, attacking an enemy, then recovering. This is referred to as "the wall of pain" which Jigglypuff is famous for.

Strangely, Jigglypuff's throws all do 10% damage. 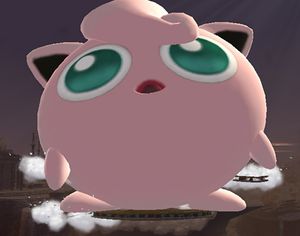 Puff Up: Jigglypuff grows into a gigantic version of itself, launching all players in the way. On small stages, this move is devastating, since Jigglypuff can effectively consume the entire stage with its body, preventing all of the other players from recovering, especially the characters who can't stay airborne long. On large stages, however, the move can be rendered somewhat ineffective since there is plenty of room for opponents to escape to. When Jigglypuff starts to deflate from the Final Smash, any contact during it causes the opponent to go flying extremely fast while receiving damage. A con for this Final Smash is that it can also take out members of your team, even when Friendly Fire is off.

There is a glitch with this. If you use your Final Smash in the repairing bridge in the Bridge of Eldin map, you will stay large. If done right you will be knocked down onto the repaired bridge. All of your attacks gain range, but be extremely careful not to side smash, side special, and roll dodge. For some reason these moves cause Jigglypuff to move proportionally to its size, but running speed and jump height will remain the same, though the animation will appear slower. If you happen to be holding a beam sword, you can knock opponents off the stage by repeatedly tapping the attack button, as the sword itself grows to match in size. There is an additional glitch that can be done with this. If a Yoshi puts Jigglypuff in an egg by using a neutral special, the egg will swell in size so only the lower middle third of Jigglypuff will be visible on screen. This makes attacks easier to land, and everyone will be constantly pushed away, but will be significantly easier to be killed if caught in a combo.

Jigglypuff, along with Kirby, are pretty much the lightest characters around, so any strategy will do. Jigglypuff's specials are fast and effective, but you only need to outspeed her and win.

Jigglypuff can be killed at extremely low precentages, so stick to smash attacks. Don't make it an aerial battle, as this is where Jigglypuff excels. Don't let Jigglypuff get away from you, as this will likely mean she is going to go for a Rollout, which is very dangerous due to its speed and knockback. Rollout is virtually the only thing, other than smash attacks, that Jigglypuff can KO with, but if you dodge it, there is a chance Jigglypuff can accidentally fall off the stage.

Edgeguarding against Jigglypuff is relatively easy. Though Jigglypuff fights well in midair, she does not move quickly. Also, considering her weight, if you manage to hit Jigglypuff while she is recovering it's almost a guaranteed KO.

At close range, Jigglypuff can't use Rollout effectively and her weak attacks put her at a disadvantage. Don't attempt juggling, as this will put her in the air. It's best to hit with powerful attacks that have knockback, since, from a distance, Jigglypuff can only use Rollout and you should be able to predict it. Attacks with long range also work since Jigglypuff has no projectiles at all, and her attacks have poor range, except for Pound and Rollout.