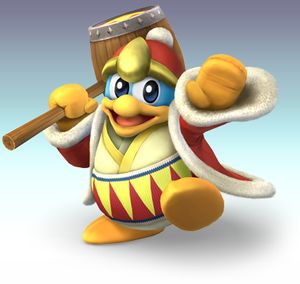 King Dedede makes his debut in Super Smash Brothers Brawl. King Dedede, like Kirby, can multi-jump but he is heavier and bigger which makes it harder for him to multi-jump.

King Dedede has a lot of ranged attacks and also powerful attacks like a normal heavy weight, but he can float and inhale opponents which makes him an unusual character. His forward tilt is a very high ranged attack compared to its speed so it is usually a good attack. His up tilt is very fast and it is also powerful, so it is also a great attack to use. His forward smash is very slow, so it will be very hard to hit a skilled opponent with, altough if it works, it usually gets Dedede a K.O. since it has so much power in it. Down smash and up smashes are pretty good attacks, they are useful in different situations. King Dedede can also chain-grab by pressing down while grabbing, then dashing forward with another grab.

King Dedede has no spikes in his aerials, and they are not that great overall except for his back aerial which is an excellent move. His forward aerial is powerful so it is useful for edgeguarding and K.O.s.

King Dedede is known for having one of the best grab games of all the fighters. He has the best grab range of all non-tether grabbers. His Down Throw chaingrabs most of the cast and even infinites some. He can also infinitely chaingrab anyone heavier than Marth against a wall, making stages like Shadow Moses Island Dedede's heaven.

Waddle Dee Army: King Dedede summons a army of Waddle Dees, Waddle Doos, and the occasional Gordo, to attack players, doing around 8-10% Damage each. However, beware that they can be stopped by some attacks and items, like the Smart Bomb. This Final Smash, on larger stages, can deal major damage or be completely avoidable (characters with the ability to float should have little problem against this). Since this final smash has little chance of KO'ing an opponent (only a few Gordos spawn during its duration) it's mostly used to raise everyone's percentage. When it's finished, hopefully it will have benefited you enough to where a single smash attack can reward you with a KO. Note that Dedede is completely invulnerable throughout the final smash.

This matchup is laughable if infinites aren't banned. Just find an opening in DK's attacks and then grab him. Then, proceed to chaingrab him infinitely. DK's large size means you don't even have to move much. Just move a little forward and grab again.

If infinites are banned the matchup is a little bit harder. Donkey Kong and you will be spamming Back Airs, as it is your most useful attack. DK has to approach you because he has no projectiles. Your grab range outranges his, and so does your Back Air (though it is minute). You and DK both have an abusive range in all your attacks so that is not a problem. Watch out for spinning kong or ground pound as they rack damage quickly and are hard to escape. When it comes to KOing, DK has more options but yours are fast and powerful. Overall a fun matchup, play carefully and you won't lose.