The Solo game modes group is composed of game modes just for one player. 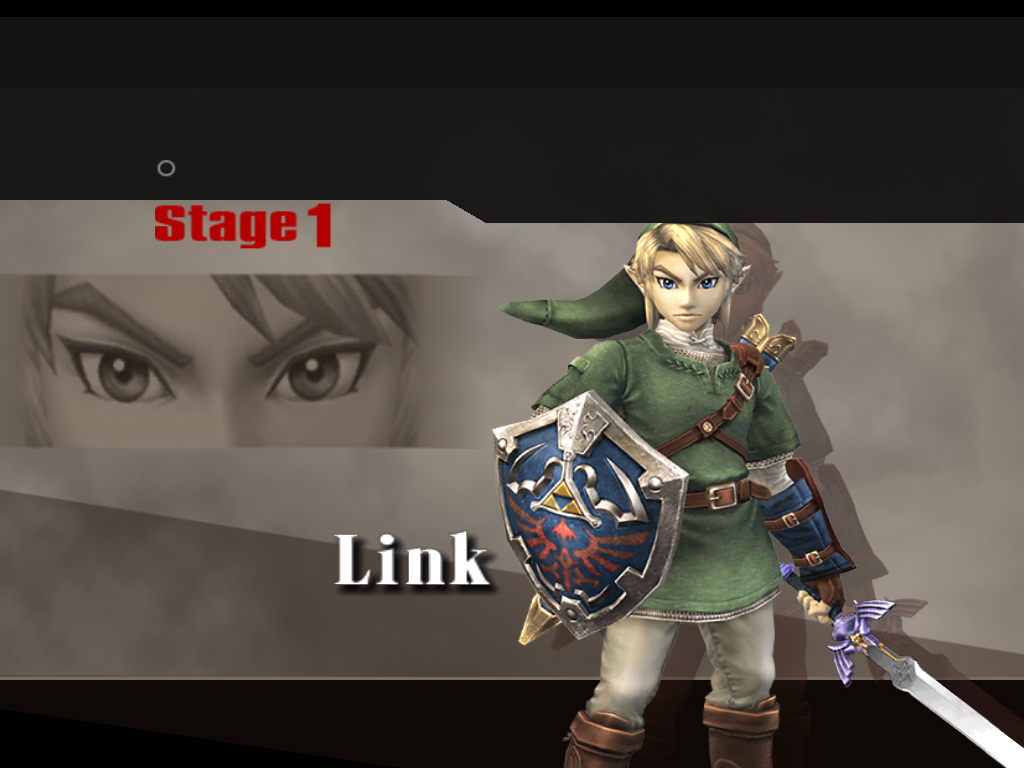 This mode has you go through twelve stages in which you fight characters under certain conditions. You may have to fight against a foe solo, or tackle a giant enemy with CPU allies at your side. There are also two Bonus Stages (one after Stage 4 and one after Stage 10) that have you play a game of Target Smash. Stage 12 of Classic mode pits you against Master Hand like in the previous game (you'll fight Crazy Hand as well if you get to Stage 12 in under 9 minutes). You can play this on different difficulty levels, the harder ones are obviously harder, but the harder the difficulty, the better the prizes. 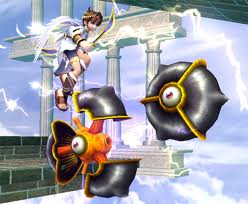 Brawl's Adventure mode comes in the form of the Subspace Emissary. In the SSE, the Smash Bros. world gets invaded by the Subspace Army. You play as various characters through numerous side-scrolling levels, full of enemies and obstacles. You access these levels by a battle map (flashing red circles on the map mean that's your next level). Over time, you'll gain party members (gaining party members can unlock hidden characters). Occasionally, you'll be forced to fight a boss character, who has a health bar rather than a percent counter. This mode cannot be complete in one sitting because of its many levels. You can play this mode on different difficulty levels.

In this mode, you have to fight your way through the whole Brawl roster (note: this mode is unlocked when all characters are unlocked). You'll fight up to three people at the same time (the characters are grouped by franchise). You fight your opponents by going through the portal in the main room. You can also use a Heart Container in here (you get three) if you have taken a lot of damage. This mode can be played on different difficulty levels.

In Events mode, you have to complete a certain mission. These missions vary from KOing a character in a certain time to defeating your foes with a Final Smash. When you complete some missions, more will be unlocked. Some of them give you a prize as well. There are forty-one events total, and each one can be played on Easy, Normal, and Hard difficulties. The higher the level number is, the harder the level (in most cases). 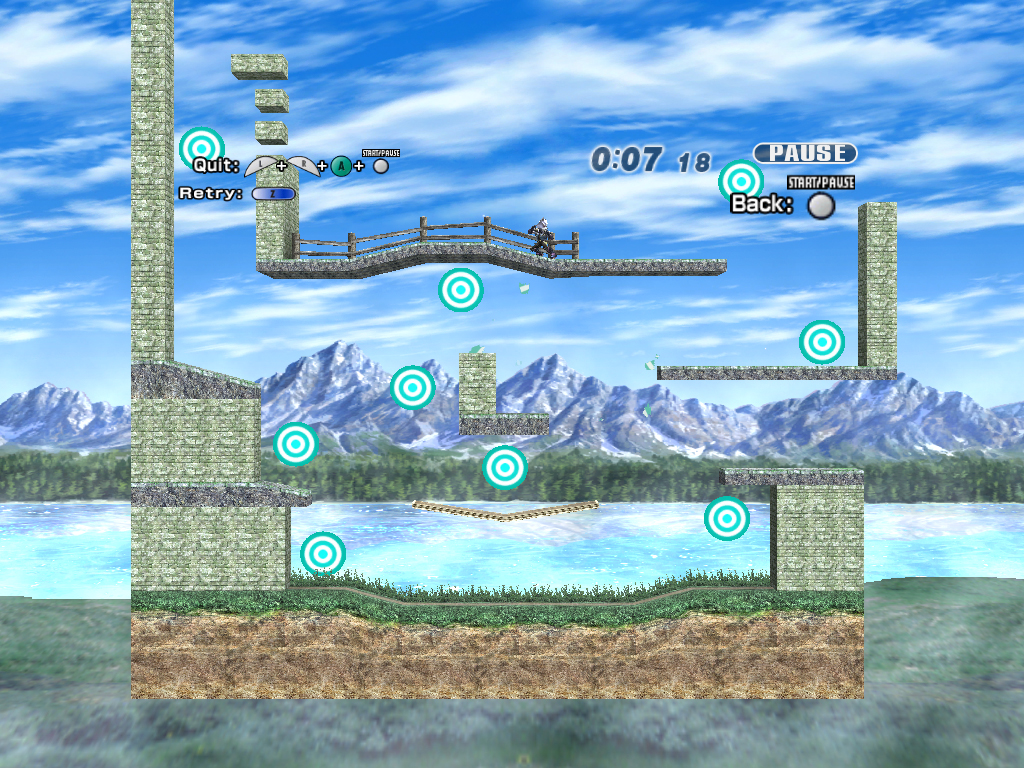 The goal of this mode is to break all of the targets (ten total) in the fastest time possible. You compete on different stages (five total), and each one is laid out differently. Rewards can be gained by breaking the targets in a certain time limit.

Use the baseball bat to knock the Sandbag as far as possible in this game mode. You start on a platform with a shield around it. In the middle of the platform is a Sandbag, and behind you is a baseball bat. Beat up the Sandbag, then when the 10 second timer counts down to one, use the baseball bat's charge swing and watch the Sandbag fly. The farther you make it go, the more rewards you can earn. Sometimes, the Sandbag will run into a Trophy (you then earn the Trophy). There are no difficulty levels for this mode.

Compete in Brawl matches against the Alloys!

Defeat ten Alloys as fast as you can.

You'll face off against an army of Alloys (100, as the name implies). Your job is to destroy each and every one. Sometimes a random character appears to fight you, but it's about as strong as an Alloy.

Survive for three minutes against an endless wave of Alloys. Your highest amount of kills will be kept as your record.

This works like 3-minute Brawl, except now you must survive for fifteen minutes.

You will face off against an endless wave of Alloys, with no time limit or score limit. Your longest time is kept as your record.

The hardest enemy you will ever face, and this is not an opinion. The Alloys are way stronger, and can defeat you in only one to two hits! Their defense is also buffed, making it harder to knock them off the stage. The highest number of KOs you get in a game of this is kept as your record.

Upon completing the Subspace Emissary, you unlock this game mode. You will fight All-Star style, except you fight the bosses you encountered in the SSE (and some others) and only one at a time. You're given three Heart Containers as with All-Star. Use them wisely. Like most Classic modes, you can play this one on different difficulty levels.

Feeling a little rusty after a break? Need to sharpen your skills? This is where you go. You can play on any unlocked stage with any character and a CPU opponent. There are different options in this mode that change the game (such as changing the speed to slow-mo or changing the CPU's actions). You can also spawn all items. If you change the CPU's actions to Human, another player can take control of him/her. There is no goal to fight for, no winner or loser. Just train to your heart's content.

If you want to challenge your friends or CPUs, this is where you go.

The standard Super Smash Bros. game mode. Pick any character available and choose your opponents (if you have no humans other than you playing). Then, pick a stage and fight! You can customize the game type to make it something other than time battle (such as stock battle where people have limited lives or coin battle where people collect coins to win). Items can be turned on or off depending on what you think. You can also fight in teams (there are three teams). Play to beat your opponents and show who's the best!

This is like Brawl mode, but in this one you can bend the rules a little. You get various options to create your own custom game (such as make people metal, or even giant). Once you have everything figured out, start the game by picking your character and a stage. See what games you can come up with!

A mode meant for people who have more than four people along with them.

This mode is a tournament (you should know what those are). Play against up to 36 opponents, advancing from round to round until finally the championship match is played. You can choose your opponents and customize the rules like in Brawl mode, and have different amounts of people playing each match (up to four).

The Vault contains many things (such as the Challenges board and your picture album) but only a few modes are actually playable. 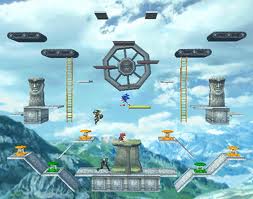 A brand-new mode to the SSB series, you can now create your very own custom stage! You start off by choosing the background, music, and size. After that, you can begin building your level using various parts. Some parts can be unlocked by completing certain objectives. When you finish a map, you give it it's name and leave a comment. If you're choosing a stage in something like Brawl mode, you can reach Stage Builder stages by pressing a button at the bottom of the Melee stages screen.

'Masterpieces' are timed demos of old Nintendo games. A large chunk of them are unlockable content.