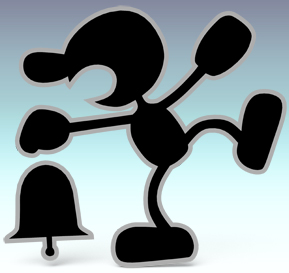 The man from the land of 2D gaming makes his Second Appearance in the Smash Bros. Series.

One of the most under-rated characters in the game, and one of the most underestimated. Mr.Game&Watch appears slow to the eye, but his maneuverability in the air and his relatively quick and damaging air moves make for great combos.

Mr. Game and Watch's up-B move does damage, is very fast, and is one of the few recovery moves that doesn't make you vulnerable. He can cancel the attack into any smash attack or even quickly fall to the ground. This opens up many options. Also, if your opponent is hanging on the edge of a map with no wall, just a ledge, like Final Destination or Battlefield, you can use his up-B to attack the edge-hogger and they might just bounce off the ledge and be sent into the abyss.

If you're fighting a 1-on-1 with a projectile user whose projectiles can be absorbed by Oil Panic, then at the start of the match back away slightly and your opponent's first instinct is to open fire. Absorb as many attacks as you can before they realize that their tactic won't work against you, then blast them with Oil Panic.

Mr. Game and Watch is 2D, which makes him one of the lightest characters in the game. During a battle where there is little time to KO people (e.g. in a free for all), generally Mr. Game and Watch will be picked on because he flies so far. Be careful of his weight weakness, and keep to the air where you can take on enemies one at a time. In the air, his down-A key attack can double hit, serving as a meteor smash. If your opponent is right next to you, use down-A which will trap the opponent and send them downward.

Mr. Game and Watch is very light, but has some powerful attacks. He has very good offense if used correctly, and decent defense with Oil Panic. His projectile does minimal damage, and his Final Smash is decent. His throws aren't great, but can initiate combos, and he moves at an average pace. However, his backwards air is a great approach option.

Mr. Game&Watch has two chain grabs. His first, use the down throw, then his neutral A (Air pump), then quickly grab the opponent and repeat. The second chain grab is a chase grab. Simply down-throw, then chase after your opponent and grab him again. Mr.Game&Watch can also slide-pivot-grab, however, he does not slide very far and this is hard to master.

Here is a video that exemplifies some of the skills explained above: Game and watch in the 9th sense! a brawl highlight video. 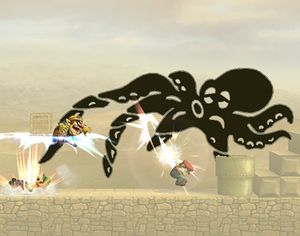 Octopus: one of the longest final smashes in the game, Mr. Game & Watch temporarily transforms into a giant octopus and attacks with his expanding and retracting tentacles, which are controlled by pressing buttons. Also, Mr. Game & Watch can double jump while in this form, however, if he falls off the stage, the final smash ends.

Bowser is one big foe to face against much due to powerful standard attacks and special attacks.

When he tries to blow fire at you use your special down b to absorb it and once full throw oil back at him.

Lucas has PK Freeze, which is relatively slow and easy to catch, but if your only strategy is to just catch it with oil panic, it will usually result in a ton of damage to you. A good tactic is to jump off the stage when Lucas is down there and use oil panic to absorb his up B attack of PK Thunder before he can move it to him and recover. The same can be done with Ness. If you want to use your down aerial, beware his up smash; it is very deadly.

Ness has a similar (but not cloned) move-set to Lucas. A good number of Ness' moves can be absorbed by Game and Watch's "Bucket" (down special) for an "Oil Panic" attack. "PK Fire" and "PK Thunder" are two commonly used examples of attacks that can be absorbed. "PK Flash" can also be absorbed, but you don't usually see Ness players using this move, due to the fact that it leaves Ness completely vulnerable. Depending on your timing, absorbing "PK Fire" can fill your bucket 33%, 66%, or sometimes even 100%. Usually, absorbing a PK Thunder will only fill it 33%. When facing Ness, it is advisable to stay out of range of his melee attacks (baseball bat, yo-yo, etc) and his PK Fire especially, as it usually leads to devastating combos. When you have to get close to Ness, I suggest taking advantage of Game and Watch's speed and agility, and stick to short, punishing combos as much as you can. Another great move is to wait for Ness to use his recovery (Also known as "PK Missile"),when he's off the stage, then jump down and absorb it before he takes off. Doing so will stop Ness from recovering, almost always resulting in montage-worthy K.O's. Note: You can NOT absorb the energy from PK Missile. You can absorb PK Thunder, but as soon as it becomes PK Missile, get out of there. PK Missile takes priority over most of Game and Watch's attacks, unless the timing on the attack is near perfect. "Judge" can cancel a PK Missile, but it's a risky, risky move.

Snake's missiles are useless with oil panic. Watch out for mines and other explosives, such as mortars, firing into ground. etc.

Ganondorf is one of the slowest characters in the game. Although his attacks are powerful, Game&Watch can easily out-maneuver him, setting up for combo attacks. Ganondorf falls quickly so you may only have a second or two for air combos. The down throw and a quick down double hammer will send him sliding across the map, and off the edge.