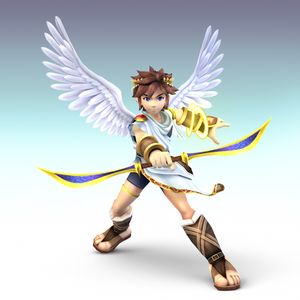 Pit is a very defensive character. He has access to two reflectors – one doubles as a regular A Spam and is a directed spamming projectile that can rack up some serious damage, and the other is possibly the best aerial mobility with a jump distance comparable to 11 jumps (including Wings of Icarus). He can attack like Meta Knight and his D-air is a brilliant move for disrupting up smashes if it is timed correctly. Also, his regular A attack, if chained, can trap opponents. His big disadvantage is found in one of his greatest strengths: the fact that he cannot recover after being hit in the midst of Wings of Icarus and occasional problems with KOing. 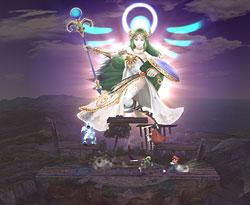 Palutena's Army: Palutena (the Goddess of Light) appears and sends many Centurions from the sky to charge down at the competitors. (The Centurions can be dodged though.) Although some of them can be hit to be defeated, they attack frequently so being hit can be lethal. Something worth mentioning is that Pit is invulnerable while starting the final smash but once the Centurions are out he is not invulnerable, unlike most other characters who are during their entire smash.

Marth outranges you in the air and on the ground, so he will be relatively safe from your attacks. He will be trying to space his tipper attacks on you while keeping out of your range. He outspeeds you on the ground so arrow camping will be a little harder. Keep him away from you using your arrows. However, any good player will perfect shield your arrows, so use them wisely. Marth's Dancing Blade outspeeds everything except your basic combo, and you can't really do anything about it. He also has a great pressure game with his attacks. Marth's recovery is fairly linear, so it should be pretty easy to edgeguard, just beware of an occasional Counter. Speaking of which, if a bad Marth is spamming Counter, just grab him. When you're recovering, avoid Wings of Icarus, as Marth can have a very easy time hitting you out of it. Mirror Shield if you can't avoid his attacks. Try to glide your way in smartly and avoid Marth's attacks. Don't try to approach with Angel Ring. He doesn't have deflectable projectiles and you will eat a Forward Smash. KOing him won't be easy, find a gap in his attacks then strike the finishing blow. When you are in KO percentages, watch out for his tipped smashes. These moves have extremely high knockback, and will KO you. In short, Pit has a bad time with Marth. Punish his mistakes and avoid being forced to no recovery. Use arrows wisely and you should win this matchup.

Fighting Ike will be a tough one. His standard attacks are strong. Evade his Final Smash because it will KO anything above 50%. He's quite slow however, so spamming arrows shouldn't be too much of a problem while coupled with some hit-and-run speed arials.

Link is as tough as Ike. Watch out for his final smash. It's lethal up-close and will KO Pit in one move. Always shoot arrows with the 1 button on the Wii Remote and don't stop firing arrows until his health is at least 125 and then do your smash attack.

This Pokémon is a fair matchup for Pit. If Lucario does use his final smash to try and kill you, fly over his reach or even over him to the other side since the beam is slow moving. If he uses his basic Aura Spheres use Down B to deflect it or dodge it, but if he's up close Smash attack him. Also when fighting Lucario be evasive by flying and land far from him then do a quick attack and fly again, once his damage is high smash him off the stage. Be wary of his Force Palm once his damage is high because he can shoot an Aura Sphere and KO you. However, if you deflect it, be careful not to let him dodge the attack and get close to you so he can use force palm. He can use up to three force palms in sucession and due to his high damage % he still might be able to KO you. As a side note, Lucario is a relatively slow character so constant rolling can leave the other player quite annoyed, forcing them into mistakes. Constantly roll through both sides of him and frequently grab for an easy win.

Sheik has a great range compared to some other brawlers so flying won't be enough, but a key item fighting Sheik is angling the arrows onto sheik and using the shield. Sheik's Final Smash is easy to dodge as long as you have distance which one jump will dodge it.

Kirby shouldnt be hard as a CPU but human controlled can be harder. Even though it will be rare to encounter a good player with Kirby but you will. Pit is the best flyer and Kirby will have to fly too. Most of Kirby's special attacks will be useless leaving him to smash attacks but you can still use ring of angles which is a great advantage. WARNING!!! try to stay in the middle because you are using up your recovery attack leaving you an easy target to fall off. After attacking you will have to fly again. Most good Kirby users will use his up-special and down-special in quite rapid succession, avoid this by simply rolling to the other side of it and grabbing him for his mistake.

You need pure skill to defeat Meta Knight as he has all the tactics that Pit has. Make use of your arrows since Meta Knight has no long range attacks. Pierce him with arrows and then slice him to get him back again you'll always win since Pit is a lot faster.